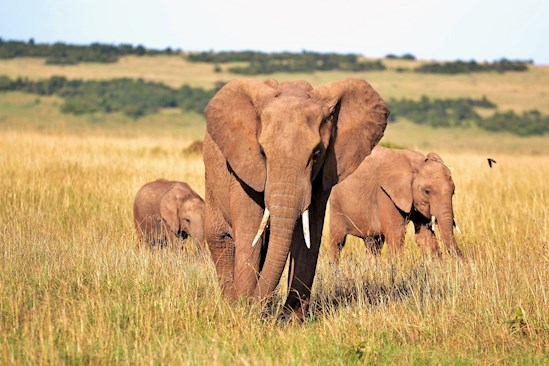 We're running one or two trips per year in May to this remote, less-frequented region.   Your itinerary was designed by National Geographic acclaimed "Champion of the Okavango", Dr. Karen Ross with the help of Glen Ross, a long time Botswana resident and owner of a local specialized travel company.  They will each lead one of our 2023 trips.

Scroll down to learn all about the trips.   Otherwise, for itinerary and price details specific to each trip, click below on the trip of your choice.

With the help from a wildlife conservation champion of the region (Karen Ross) and with support from someone with nearly 20 years of experience running a custom tourism company in the region (Glen Stephen at Liquid Giraffe), we’ve assembled the elements of a one-of-a-kind 14 day small group trip to some of the world’s most iconic wildlife destinations.  We've added cultural / historical components which, all told, will give you an authentic taste of Southern Africa.   Most of the places you’ll be experiencing are UNESCO World Heritage sites – they’ve been formally recognized as being of global significance by the international community.

Why is a Galapagos specialist offering the Okavango and surrounding sites?

This is a fair question. CNH Tours does not organize or sell trips to destinations unless we feel we are intimately familiar with them.  For 20 years we have focused exclusively on Galapagos for the simple reason that we personally know no other wildlife destination so well.

It’s only because we were able to bring Karen Ross and Glen Stephen on board that we feel we can offer this particular trip.  We asked them to design this one-of-a-kind custom visit, one they considered would be the best 2 week trip to the region, and to do it during what they considered to be the best time of year to appreciate the diverse attributes of the places you'll be going to.  This trip is the culmination of their work.

Some places on Earth are of such outstanding natural and cultural significance that the countries of the world have come together to identify and help conserve them.  To do this, they created the World Heritage Convention - a tool that encourages countries to put forth, for the benefit of present and future generations, sites that are of global value.

This trip will focus on such World Heritage sites in Zimbabwe, Botswana and South Africa.

Because these places are far away and difficult to access, you will likely not be returning anytime soon.  You’ll want to maximize your chances of being exposed to the best of what the region offers, both in terms of wildlife, and in terms of the historical/cultural context.     You’ll be spending a good part of your days outside, on small boats / safari type vehicles or on light to moderate walks in the hills.   You’ll witness a variety of ecosystems and their wildlife.   We feel that at the end of a fascinating, but perhaps a bit tiring day, you’ll appreciate comfortable accommodations.

To this end, we’ve ensured that you’ll not only be seeing some of the world’s most outstanding places, but that you’ll be able to unwind in some of the most comfortable lodges / camps on offer.    On top of all that, the small group environment will be led by a people having an intimate familiarity with the region.   This will ensure that you’ll have the best possible understanding of how the ecosystems you’re visiting are being conserved in light the challenges they face.

What is the role of a tour leader?

A tour leader is the trip's concierge - someone always on hand to be sure that all is going as swimmingly as possible during your trip.  They are there to address any concerns, issues or problems.  They can act as intermediaries between the guests and the managers of the hotels / lodges / restaurants, ensuring that specific needs are properly attended to.

A tour leader is not a guide or local interpreter.  On our trip, each of the destinations we will visit will have their own stable of experienced professional guides, intimately familiar with the ecosystems we will be exploring.  They will accompany you an all the outings, ensuring you get the most out of your outings.

Heather and Marc own and operate CNH Tours, and company they established in 1999.

Most CNH Tours Galapagos alumni will know Heather.   From 2002 until 2018 (when Kelsey Bradley joined the team) she was the only front person at CNH Tours  - personally involved in helping thousands of people arrange their Galapagos trip of a lifetime. Those who book the Okavango trip will have communicated with her husband Marc.  While he created CNH Tours in 1999, he handed it over to Heather in 2003 when he took up a job at UNESCO's World Heritage Centre in Paris - there, he monitored the state of conservation of World Heritage sites, among other things (Marc's bio). They spent 18 months in Nairobi before returning back to Canada in 2015, when Marc joined Heather at the helm of CNH Tours.

Marc & Heather (not quite a savanna ecosystem)

Karen was born and raised in Kenya. She has a doctorate in wildlife ecology from Edinburgh University, carrying out her PhD research in Kenya under the supervision of the famous elephant zoologist, Dr Iain Douglas Hamilton.   She was hired by Hugo van Lawick (renowned wildlife film maker - and Jane Goodall’s former husband) on a filming job which led to her work with the BBC, producing the book “Okavango: Jewel of the Kalahari”.  The book was first published as a companion to a BBC three part documentary of the same title.

Karen’s subsequent work in the Okavango Delta was part of critical conservation activities in Botswana, including the protection of the Okavango Delta from mining threats and upstream water withdrawals from Namibia.  She led the NGO pressure to curtail the proliferation of fences in the Okavango region (fences are harmful to the movement of wildlife), co-founding a forum between different government ministries and between government and civil society.

During decades of conservation work in Botswana, mainly with Conservation International, it became clear to Karen that overarching protection for the Okavango Delta would be given through UNESCO World Heritage designation, considered by experts to be long overdue. From 2007 Karen motivated the Government of Botswana to consider this important listing. From then she collaborated on this effort with the Government of Botswana, Okavango communities, national and international conservation NGOs, the tourism sector and numerous other stakeholders, including government authorities in neighbouring Namibia and Angola.

She was a lead editor of the World Heritage nomination dossier[2].  Thanks to this lengthy and intense work, the Okavango Delta finally made it on to the World Heritage list in 2014.  Karen's relentless efforts at conserving this iconic wilderness has led to her being crowned "The Champion of the Okavango" in the National Geographic magazine.

Once you’re booked on the trip, Karen will become your main contact point with CNH Tours.  She’ll be answering emails and helping you best plan for your time in Africa. 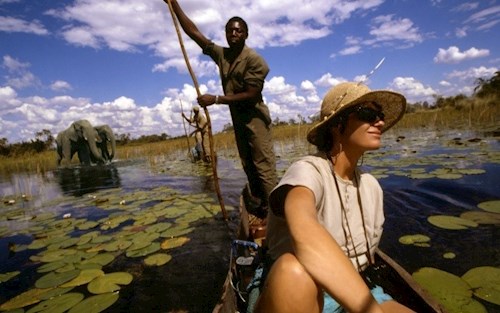 Karen in an Okavango Delta mokoro

[2] The complete dossier contains fascinating information.  It is a huge file, but well organized.  You can find it here: https://whc.unesco.org/en/documents/129548

Below is a partial list of iconic and less iconic species you are likely to see while on the trip – though nothing is absolutely guaranteed.   You will note that most of the iconic African savanna type animals are on the list, along with many more lesser known, but equally fascinating mammals, birds and reptiles.   You will also have the opportunity to get acquainted with a very wide diversity of plant species.  Plant diversity will be most pronounced during your visit to Cape Town, which is located in one of the world’s richest centres of plant speciation with very high levels of endemism (e.g. plants found nowhere else on Earth).

For your safety and general protection, we require that all guests have emergency medical insurance. We strongly recommend that you obtain the following types of insurance, which are commercially available:

All of our guests are automatically covered by our complementary US$200,000 emergency medical evacuation insurance for the duration of the 14 day itinerary.

Proof of emergency medical insurance to be submitted before your invoice balance is due.

Testing / vaccination requirements may be in effect for this trip.  CNH Tours cannot guarantee what kinds of national entry requirements will be in place when you embark on the trip.  We strongly recommend that you be prepared to be tested at your expense for border crossings, and that you get vaccinated to reduce the chances of any problems.  CNH Tours cannot be held liable for any disruptions to the trip due to COVID-related problems, or for any other such force majeure situations.  Should the trip be disrupted or need to be cancelled, CNH Tours will do all it can to ensure your investments is protected, but cannot make any guarantees.  We recommend you acquire appropriate travel insurance that reflects your degree of risk tolerance.

Upon booking, you will receive a document with the terms and conditions for your trip.  Should there be any discrepancy between that document and this page, the document will have priority.