Near extinct mockingbird to be re-introduced

The Charles Darwin Research Station recently announced its efforts to re-introduce the nearly extinct Floreana Mockingbird back to... Floreana island!   This very rare bird (about 100 individuals only!) survives only on two tiny islands just off the coast of Floreana, in small numbers.  With the help of a Mexican scientist experienced in this kind of work (he successfully re-introduced the kakariki, a species of parrot,  to its native habitat in New Zealand). 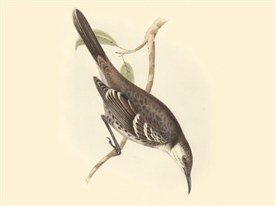 Though it is popularly believed that the finches of Galapagos contributed mostly to Charles Darwin's thinking on evolution, in fact, his writings clearly indicate that the Galapagos mockingbirds were more important in this regard.   Darwin took the time to note the differences in the mockingbirds he collected in Galapagos, and to note the islands from which he had collected them.   He didn't do this for the finches.

Galapagos mockingbirds are wonderful to observe.  They are inquisitive and very alert.   When CNH Tours lived in Galapagos, on hot days, we'd leave the door to our house open, and a mockingbird would come in and look around for any stray spiders or insects in various nooks and crannies (it was never disappointed!).    Española mockingbirds are the most brazen - they will peck at your shoe laces if you let them.

The Floreana mockingbird was extirpated (e.g. disappeared from this particular place, but existed elsewhere) from Floreana likely as a result of the arrival of introduced species such as cats, rats, and perhaps chickens (which may have introduced diseases).  Scientists believe that recent cat and rat control efforts on Floreana island will allow for the successful re-introduction of the mockingbird there.