Jonathan Green, a long time naturalist guide in Galapagos, and accomplished photographer, has launched the Galapagos Whale Shark Project in cooperation with the Galapagos National Park Service, the University of Davis, California, Conservation International and the Charles Darwin Research Station.

As a diving guide, Green regularly spends time in the northeast islands of Wolf and Darwin, an 18 hour boat ride from the main town of Puerto Ayora.   These islands are only visited by live aboard scuba diving boats.  Over the years, Green has learned to recognize individual whale sharks and has noted that only females frequent the area.  He has supposed that it might be a calving area for whale sharks (they give birth to live young thought to be up to 1 meter in length) - but he has never seen any young.   He has also noticed that numbers fluctuate during the full moon, that though they can be seen any time of year, they are more common between May and November.   He also noted that individuals are rarely seen on more than just a few occasions. 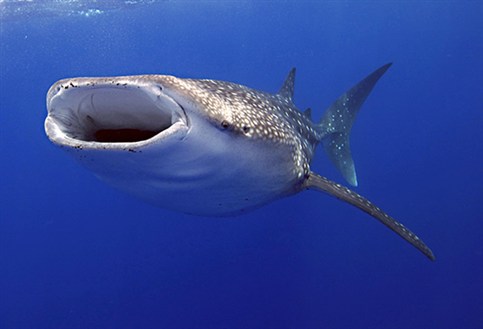 All these questions have perplexed him and have prompted him to work on developing this project.  The project will use satellite tracked devices fixed to whale sharks, permitting them to be followed over time.  These mysterious creatures, locally called "pez gato"  (cat fish) by fishermen frequenting those waters, is very large and covered with white polka dots.

SEEING A WHALE SHARK: Though whale sharks have occasionally be spotted by snorkelers on a regular Galapagos cruise, this is not too common.   To have better chances of seeing them, one has to join a scuba diving live-aboard cruise - the only cruise ships that visit the remote Darwin and Wolf islands.