Alien, bird killing fly under the microscope this week

This fly is a serious threat to bird species endemic to the Galapagos Islands. From 31 January to 3 February, experts from different countries are meeting in Galapagos to participate in a workshop organized by the Galapagos National Park and the Charles Darwin Foundation, which seeks to find ways to control Philornis downsi, a parasitic fly attacking at least 17 bird species in the archipelago, including some endangered species.


This event will be attended by scholars from countries such as USA, France, Spain, Australia, Trinidad, Austria, Argentina and Ecuador.  Participants will develop a research and management plan to control this fly introduced and will talk to guides, college students and the general public.

The first part of the workshop will identify the information that is not available and prevents development of effective control of the insect. Then the feasibility of different control methods such as traps attractive, introduction of sterile insects and biological control will be analyzed.  Finally, the participants will develop an action plan for research and management of this introduced species over the next 5 years and identify possible sources of financing.

The parasitic fly's larvae cause high mortality in young birds, including endangered species such as the mangrove finch, finch medium and Floreana mockingbird.  Implementing a plan to control this fly is extremely important. In addition to direct mortality, studies have confirmed that the chicks that survive often have deformed beaks, reduced growth rates and anemia.

As former staff of the Charles Darwin Research Station and of the Charles Darwin Research Station, CNH Tours is very aware of the perils linked to introduced species in Galapagos.   One little fly like this one can lead to the extincction of several species found only in Galapagos.   Once they are established in the islands, it can be very difficult or impossible to eradicate them, resulting in the need to establish permanent and expensive programmes to ensure they don't end up destroying what Galapagos is famous for.   So, when you're being checked at the airport for transporting unauthorized foodstuffs, remember this fly. 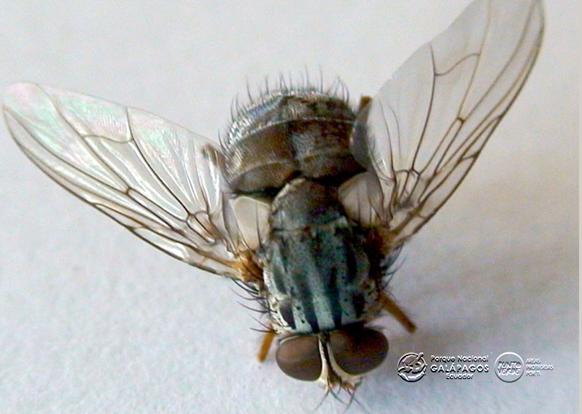