A ton of trash was collected in the harbor of Puerto Ayora Bay this week, through a joint effort by rangers of the Galapagos National Park Service (GNPS), members of the Artisanal Fisheries Cooperative COOPROPAG, volunteers and residents Puerto Ayora.

The initiative was related to the activities planned for the celebration of World Oceans Day (June 8), and was attended by more than 30 people, taking advantage of the favorable tide conditions.

The president of the Artisanal Fisheries Cooperative, Julian Quimí, provided a vessel for this activity, as it is aware that everyone needs to participate in the care of the sea.

Seeing the work of rangers and volunteers in these areas, residents decided that they were closely concerned with the issue and also participated in this coastal cleanup.

Abandoned appliances such as stoves, refrigerators, freezers were found, along with several packages, including apples and bags, containing fuel oil. 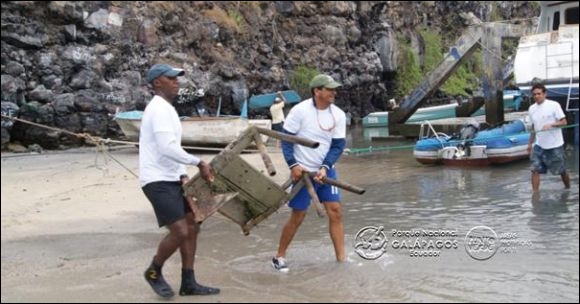