CNH Tours has learned that the Galapagos National Park Service (GNPS) has charged a German tourist for attempting to smuggle four land iguanas out of the islands.   Currently in custody, Mr. Dirk Bender will attend a bail hearing on 13 August- during which it will be determined how much bail he has to post to get his conditional liberty from prison.   He was arrested at Baltra airport in Galapagos on July 8 after four iguanas were discovered in his suitcase (see picture).

Pursuant to Ecuador's criminal code, bail may be refused.The GNPS also discovered, during its research on Mr. Bender, that he was charged in Fiji for attempting to smuggle endangered Fiji iguanas, in December 2011.

If bail is set and if Mr. Bender can provide the bail money, he would be free to leave Galapagos, but would have to stay in Ecuador until the formal hearing on the charges.   The GNPS will argue that Mr. Bender should not be granted bail, emphasizing that this was a crime against the World's Heritage (as the Galapagos are a UNESCO World Heritage site), and that that he is a high risk for leaving the country illegally.

CNH Tours is very pleased to see the effective work of the GNPS at controlling the movement of goods out of the islands.    It is only be detecting and punishing these actions appropriately that others will be discouraged from doing the same.   Galapagos should not be a collection area for international wildlife traffickers. 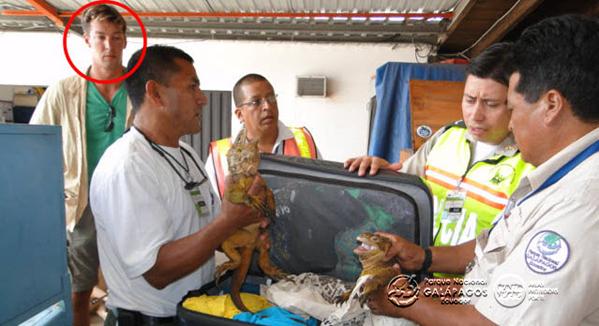