CNH Tours has unilaterally (we are not very democratic it seems!) decided that the picture below is the best Galapagos picture of the year, courtesy of the Galapagos National Park Service.

In it, we see the moment in which inspectors at the Baltra airport have discovered live iguanas stashed away in the suitcase of Dirk Bender, a German national about to embark on his flight to the continent, and beyond.   Mr. Bender, in the background, looks like a child caught with his hand in the cookie jar.   This happened last July 8th, and Mr. Bender has been in detention at a Puerto Ayora prison ever since, awaiting trial.   There is a 6 month statute of limitations in Ecuador, and if he's not tried before the 8th of January, he goes free.   The Park Service announced yesterday that a trial is scheduled for tomorrow, January 4th.

Mr. Bender was caught doing exactly the same thing in Fiji, on December 3rd, 2011.  In that case, he was trying to smuggle a Crested Fiji Iguana.  He was liable for a fine of up to $20,000 - but CNH Tours has not been able to determine what his sentence was exactly.

It's very nice to see the law being fully applied in Galapagos, particularly when it comes to environmental crimes.  Infractions of environmental laws are not often taken seriously by courts in many countries.   The work of the judiciary in Galapagos is becoming increasingly sensitive to environmental issues - a good thing for this very fragile natural area. 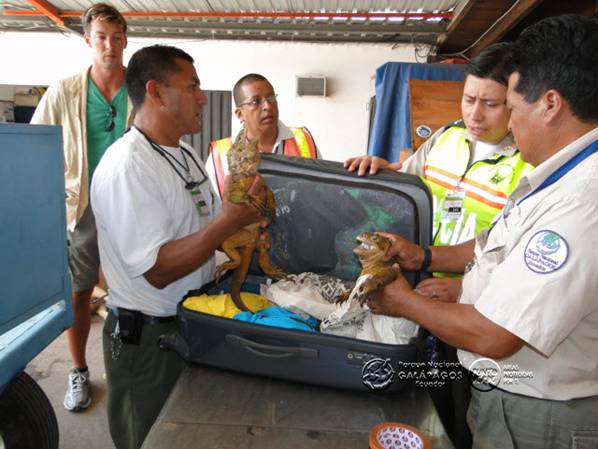