The Park immediately proceeded in the confiscation of the sea cucumbers and moved them to the Parks offices  on that island.  Park staff counted 32 477 sea cucumbers, most of the species Isostichopus horrens .  Later sea cucumbers were placed in 43 pouches in which they remain in custody of the respective GNP , during the administrative and criminal process that will begin to investigate was is considered an environmental crime in Ecuador.

Carlos Rivera, president of the Fisheries and Seafood Cooperative, San Cristobal, stated that the illegal harvesting of sea cucumbers is regrettable because it undermines the natural resource's ability to regenerate itself and to continue providing a livelihood to local fishermen.

The sea cucumber is a protected species in the Galapagos Marine Reserve and worldwide, some species are on the IUCN RedList of endangered species, and protected by the Convention on the International Trade in Endangered threatened Flora and Fauna (CITES). They are extremely important to ecosystems as they oxygenate the ocean floor.  Sea cucumbers are related to star fish, and sought after mostly by the Asia market. 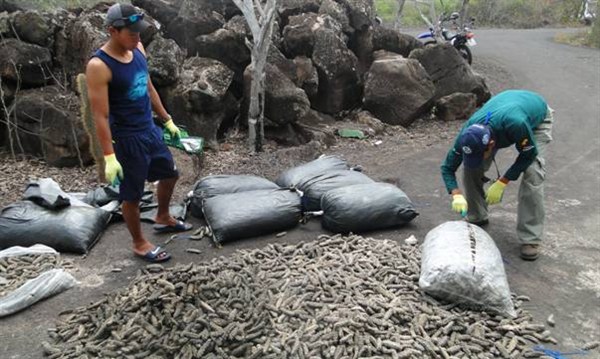