Local kids enjoy a good soccer game – yes, there are towns in the Galapagos

When people ask me about my time in Galapagos, most are surprised to find out that there is a substantial population of Ecuadorians actually living there.   The islands were first discovered (at least by Western eyes - there is some poorly substantiated evidence that indigenous groups from the mainland may have been there at one point) in 1635, but weren't permanently settled until the early 1800's.    Until the 2nd World War, the population remained very small, perhaps a few hundred people living on the three main islands.   The war brought in military investment, which attracted more people - as Baltra island was used as an American advance base for the protection of the Panama Canal against potential Japanese attack.   After the war, the population was somewhere in the 1,000 to 2,000 range until the 1960's, even early 1970's - when it became feasible for the first time for people to consider visiting the islands as tourists.   Tourism growth was exponential over the following decades, going from about nothing to about 200,000 annual arrivals in recent years.   The expanding tourism economy, along with a short but intensive 1990's boom in fisheries drew in many economic migrants from the continent.

The island's population now stands at about 30,000 permanent and long-term temporary residents.  These are scattered among 5 islands - in order of importance - Santa Cruz, with the main town of Puerto Ayora, San Cristobal, with its town of Puerto Baquerizo Moreno, Villamil on Isabel island, and Floreana island (population of about 100).  Baltra island has a small contingent of military personnel who manage the airport there.    That leaves well over 100 uninhabited islands in the archipelago.

Below:  boys enjoy a good game at Santa Rosa, in the Santa Cruz island highlands.  Thanks to Wilson Cabrera, a top goat hunter and former colleague, for the picture. 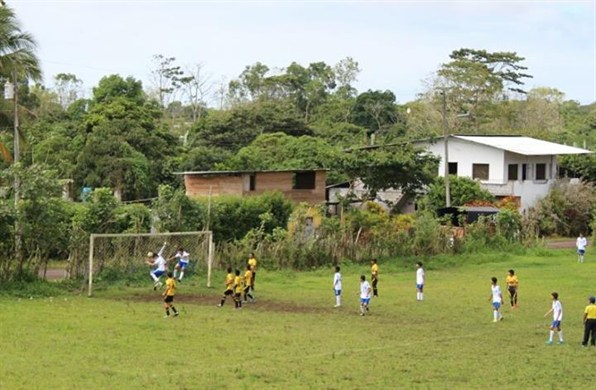