CNH Tours is relaying information that it has just received - from Monday 25th March, the new passenger terminal on Baltra Island in the Galápagos was fully operational for both arriving and departing passengers.  It had been operational for only arriving passengers for several weeks prior to that.

Though touted as an improvement to travel to and from the islands, having recently used the airport 2 weeks ago, CNH Tours is sorely disappointed in the overall look and layout.  While the previous airport was indeed reaching its limit in terms of passenger capacity (it was built a good 20 years ago, when there were just 4-5 flights a week arriving to Baltra, and now there are up to 6 a day...), it was at least built with mostly local materials, and fit right into the landscape as best an airport terminal could.

The new behemoth is at least 4 times the height of the old one, and built with large white panels, and filled with pipes and wiring - looking more like an manufacturing plant out of a Monty Python cartoon, than an airport terminal (at least when we saw it in early March - perhaps some aesthetic touches still remained to be completed).  It is even equippred with sprinklers in case there are fires - dangling from the rafters above - but frankly, beyond the Panama hats many visitors are donning, one is hard pressed to find any flammable material in sight.  And another thing - despite having an area of about 3 football fields, the toilets are tiny!

Oh well, such is progress we suppose.   To add insult to injury, visitors will have to pay a $26 tax to use the airport.  This will be automatically added to the price of your plane ticket (if bought after April 4th - otherwise you will be charged at the check-in counter). 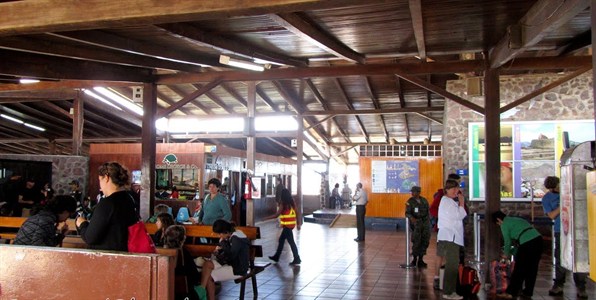