Over the past several months, the Galapagos Marine Reserve has placed about 30 fixed anchor systems (ecological mooring buoys), which can be used by tourist boats visiting sites where they are located.

Mario Villalta, head of Conservation and Marine Ecosystems at the Park Service, notes that this project originated with the "Zero Anchors" project, which tested various systems and materials for five systems subsequently installed in Bartholome Island.  After one and a half of use, they proved the effectiveness of these with a significant recovery of the seabed.

Through this initiative, the Park Service is promoting lower impact tourism in the archipelago, aimed at improving the quality of this activity while reducing the impacts caused by traditional mooring system (anchor and chain).  One can imagine the impact on the sea floor from dropping anchors, and chains dragging on the bottom, every day all year long, in different places.   The new system will result in only a tiny fraction of sea floor impact compared to before.

The Park Service has plans to install a total of 70 fixed anchor systems at 10 sites the marine reserve over the next while.   An added benefit will be "no more noise" from an anchor being dropped or raised in the middle of the night.     Keep an eye out for an anchoring buoy near you! 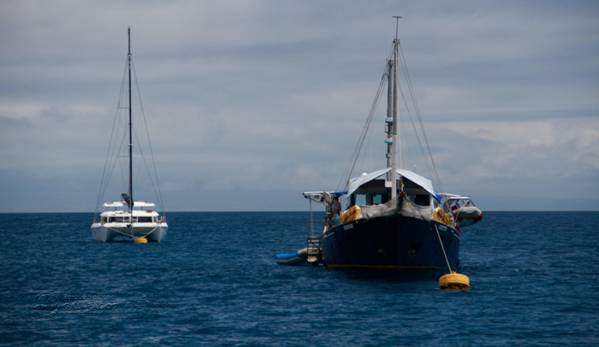 Written by Marc Patry Posted on 3 May 2013
news