Lonesome George - rising from the dead?

It seems Lonesome George will live on in Galapagos.  After his death of this iconic "last of its kind" giant tortoise in June last year, he was shipped to the American Museum of Natural History, where he was "stuffed"  by expert taxidermist, and mounted  for display.    He will make a temporary appearance at the museum this winter, before heading back to his homeland next year.

George was the last of the Pinta Island tortoise species.  He was discovered in 1971 by a team of National Park goat hunters (goats had been introduced to the island and were destroying its forests).   They brought back to Puerto Ayora, the park headquarters, and the site of the Charles Darwin Research Station.   For years people searched for any remaining Pinta island tortoises -  in 2001, when we wilved in the islands, CNH Tours met up with one team that had proposed to use infra-red, helicopter imaging, on the assumption that after dark, while the land cooled, tortoise bodies, even though cold blooded, would remain hotter for a while and show up.   That didn't work.   Nor did so many other search missions.    So George remained alone, and lonesome.   The extinction of his species took place before he died - as there was no hope for his reproduction.

We used to live at the Charles Darwin Research Station, just down the short trail to George's pen.   It was sad to learn of his death - we had assumed he would still be there long after our own passing, given that tortoises can live up to 200 years, and he was thought be closer to 100.   But that's life. 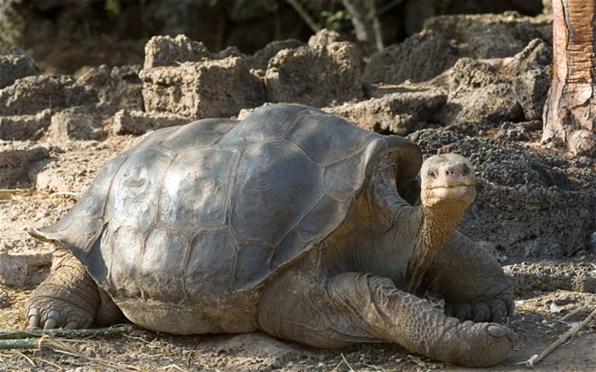