Until very recently, there were 30 confirmed shark species in Galapagos waters - thanks to the efforts of some dedicated diving enthusiasts,  a keen local fisherman and a Galapagos student out on diving sortie.   Pictures and video were obtained for each report and analyzed by a variety of experts, and consensus was reached on the species involved.  The results were published in a scientific paper.   The new official members of "Galapagos shark species" club are: 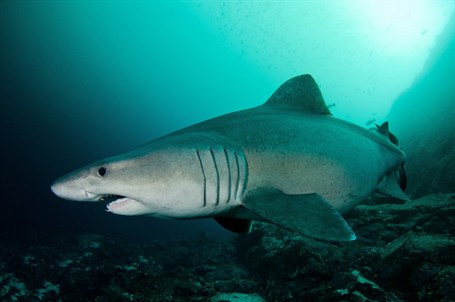 Along with Cocos Island (another World Heritage site), approximately 700 km to the northeast (450 miles) Galapagos is considered a "shark mecca" of the world by dive outfitters.   "Galapagos probably sees more variety of shark species than anywhere else!" claims Shark Diving Experts.   Now we'll need to add another three species.  CNH Tours, being natural born skeptics, will note that Galapagos probably benefits from a lot more scientific attention than other places, which might tip the balance in its favour in terms of spotting and officially confirming shark species, but that's fine by us.

Some of the main shark highlights in Galapagos include:

Great white sharks are generally absent from Galapagos waters, tough an old colleague of ours, and Galapagos native, Felipe Cruz, once reported to us as having seen one in the Bolivar Channel, between Fernandina and Isabela islands.   It's nice to know they are rare!