The Galapagos National Park Service reported yesterday that it had detected a number of dead and sick marine iguanas along some beaches (both off limits to the public and those open to the public) of Santa Cruz Island.  It said it was studying the causes of death of 14 marine iguanas in the popular beach area of Turtle Bay, site which has been intensively monitored over the years.  Apart from dead marine iguanas, the Park found a sick one, behaving as if it needed to vomit.

The Park proceeded to close access to the colony of iguanas in Turtle Bay, and also reviewed the health conditions of individuals in this sector, where a population of about 775 individuals live.

Veterinarians and biologists performed the autopsy of dead individuals, those with most of their bodies in good condition.  Results showed bellies full of green and red algae with increased prevalence of the red algae, as well as inflammation and bleeding in the small intestine.

Washington Tapia , head of research applied to the GNP  and an old friend since CNH Tours used to work in Galapagos,  said that the precise cause of death was not yet known, though it appeared to be related to a digestive problem .  The park indicated that there was no evidence of water contamination in the areas affected.   Studies continue with the support of scientists from partner institutions, specialists in marine iguanas and reptile diseases, to implement remedial actions if necessary. 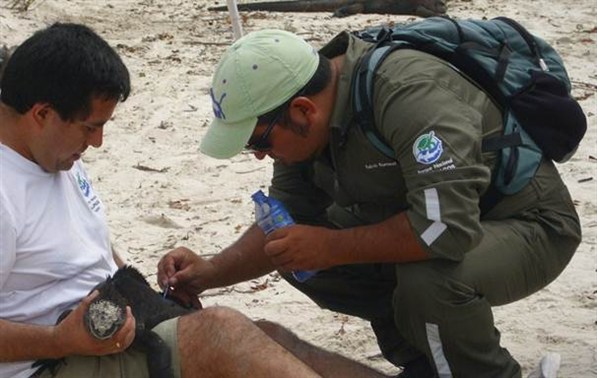