The Galapagos National Park Service reported yesterday that it had retained two small boats from the Ecuaorian coastal fishing port of Manta during an control operation.  They were retrained for trespassing in the Galapagos Marine Reserve and for the use of banned fishing techniques such as longline fishing (a 2-3 km fishing line with hundreds of hooks, that capture anything from fish, sealions and albatrosses).  Fishing in the Galapagos Marine Reserve is allowed only to Galapagos based fishermen, and only using artisanal techniques.

The operation, in coordination with the maritime authority was held on February 8 at five nautical miles inside the Galapagos Marine Reserve, where rangers detained the Scarlett I with three crew and theJudith Crissel III with two crew.  During the inspection the crew reported that they were conducting fishing operations in coordination with a large mother ship, the  Don Elio II located just outside the Marine Reserve boundary.  This is a common practice – whereby the big ships linger just on the edge of legality, but send the small ships into the reserve.

Among the evidence, the rangers found aboard three swordfish. The boat and crew were taken to Santa Cruz, where they were turned over to the appropriate authority. 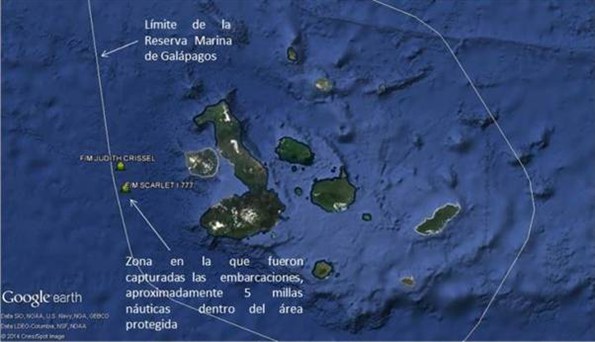