Quito (AFP) - An Ecuadoran freighter ran aground in the Galapagos islands yesterday, but "for the moment" does not pose a threat to the Pacific archipelago's unique environment, the Galapagos National Park said.

The vessel, which ran aground off the island of San Cristobal, is carrying 16,000 gallons (more than 60,000 liters) of fuel oil.

But an inspection "confirmed that the part of the vessel that is on the rocks is distant from the fuel tanks," the park said.

"So for the moment it does not represent an environmental risk," it added.

Authorities, however, were drawing up contingency plans in case of a spill, it said.

The ship's cargo also is being offloaded to make it lighter in hopes that a high tide will lift it off the rocks.

The Ecuadoran-owned island chain, which is located 600 miles (1,000 kilometers) from the mainland, is famous for unique flora and fauna studied by Charles Darwin during the voyage of the Beagle as he developed his theory of evolution.

CNH Tours adds that his is a near exact repeat of the Jessica shipwreck of January 2001.  That ship eventually broke apart, releasing most of its fuel.   60,000 litres would fill a box 5 metres (16 feet) wide, 5 metres deep, and 2.2 metres high - the size of a modest bedroom.  It seems somes lessons have not been learned. 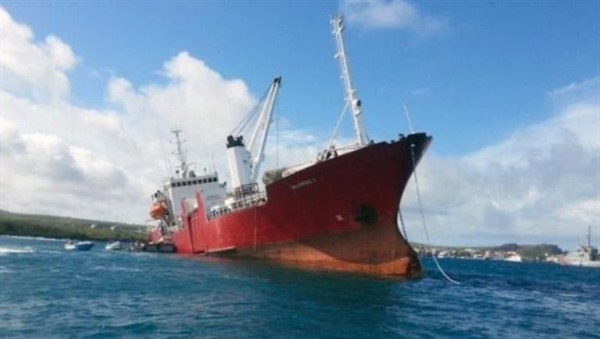