Grounded cargo ship is re-floated and towed away

Defying all my expectations, the Ecuadorian authorities succeeded in re-floating the grounded cargo ship "Galapaface" (what a name...??) yesterday.  This ship ran aground off of Puerto Baquerizo Moreno in early May.   Back in 2001, the Jessica, a fuel ship, ran aground at nearly the same place, dumping quite a bit of bunker oil into the sea and eventually falling to pieces due to the constant pounding of waves.  I had anticipated that this would be the fate of the Galapaface - but no, it appears that the national authorities have developed the capacity to salvage such ships.  This is very good news for all (including the ship insurance company I suppose!).   The Galapaface was salvaged with very minor environmental impacts.  Bravo Ecuador!

Galapaface being refloated and taken away, off San Cristobal Island, with the typical "Garua" season low cloud cover over the island. See Kicker Rock - Leon Dormido island in the background, just above the the Galapaface bow.  (courtesy Galapagos National Park Service) 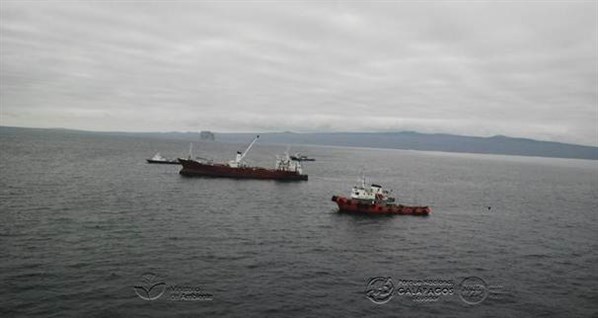