Lonesome George’s Final Resting Place – What do YOU think?

There’s an animated debate going on right now about the final resting place for the icon of Galapagos, and by extension, all island conservation challenges – even all conservation challenges worldwide:  Where should the stuffed and mounted remains of Lonesome George (LG), the Pinta Island Galapagos tortoise so famous for having been the last of his kind for at least 40 years, rest?   LG died in 2012.  His remains were sent to the Museum of Natural History in New York where they were given careful treatment and restored.   He was unveiled a few days ago at the museum, where he is on display until January.   Aftr that, he’s to travel back to Ecuador.   Galapagos residents are of course furious at the idea that the Ecuadorian government’s proposal to have him displayed in Quito, in exchange for a bronze replica to be standing guard in the islands.    A heated discussion is filling social media these days on the matter.

The Guardian newspaper has come up with a novel idea: Lonesome George, already an emissary for conservation work worldwide, should go on a slow (tortoise paced) world tour to help educate and sensitive people on the challenges of species survival in a rapidly changing, globalizing world with fewer and fewer wild spaces in which to seek refuge.  See their article here:

Lonesome George’s species was killed off by a combination of hungry whalers and seafarers looking for fresh meat to eat, the accidental introduction of egg and hatchling tortoise eating rats and pigs to Pinta island in the 19th century.    Giant tortoise species on other Galapagos islands managed to survive this pressure.  Those surviving on islands with rats and pigs remain in a precarious state.  Thankfully, conservation efforts by the Galapagos National Park Service and the Charles Darwin Foundation are helping improve matters.

Below:  LG on display in New York 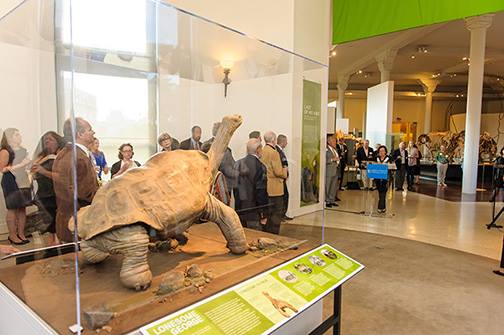