The different faces of El Niño

(note from CNH Tours: Geert Jan "GJ" van Oldenborgh, of the Royal Netherlands Meteorological Institute -KNMI-, is a dear old friend of ours.   Elementary particle physicist turned climatologist, GJ is a well published climate scientist, and a contributor to the work of the Intergovernmental Panel on Climate Change.  He graciously accepted our invitation to write a short piece on the current El Niño, and how it compares to the severe one of 1997-98).

Originally, fishermen in northern Peru used the term “El Niño” to denote a seasonal warming of the seawater around Christmas. This reduced the amount of fish and their catches. Later, it was used to describe the warming in years in which it was particularly strong. In the 1950s, the Dutch scientist Berlage realised that these years were often the same years in which it was exceptionally dry on the other side of the Pacific Ocean, in Indonesia. This was part of the world-wide “Southern Oscillation”, discovered half a century earlier by scientists searching for patterns in worldwide climate anomalies like droughts and floods.

El Niño and the Southern Oscillation turned out to be two aspects of one climate oscillation, which scientists now call ENSO. Well, almost: the ocean temperature most closely associated with the Southern Oscillation is a warming along the equator of the Pacific Ocean, from the date line eastward. Often this coincides with warming along the coast, but this is not always the case. Unfortunately, the name El Niño came to be used for this warming as well, it caught on more than “Southern Oscillation”. We are therefore stuck with one name for two related, but distinct warming events: along the coast and along the equator. (There is third part of ocean where a warm year is called El Niño, along the coast of Chili, but that is totally unrelated to these two and I will ignore it.)

In 1997 El Niño was very strong in both senses. Temperatures near the coast of South America and the Galapagos Island were around four degrees Celsius warmer than normal for months at a time and reached three degrees above normal along the equator towards the date line. The coastal El Niño had large negative impacts on the sea life in the region, with the fish disappearing and larger animals struggling to survive. The islands and coast also got much more rain than normal. The heating along the equator caused worldwide disruptions of the weather, such as severe drought in Indonesia with huge forest fires.

The smaller El Niño of 2010 was very different, as there was virtually no warming along the coast, only far out in the ocean. It had worldwide effects, but for the Galapagos Islands and the coasts of Ecuador and northern Peru it did not exist. In contrast, in the summer of 2014 there was a coastal El Niño that did not extend to the ocean at large.

This year, 2015, the equatorial Pacific is at the same temperature as in 1997, and similar worldwide effects are developing or forecast. However, the coastal warming of seawater is less intense than it was 18 years ago, with temperatures only two to three degrees Celsius above normal so far. We therefore expect the local effects on the Galapagos Islands and the coast of Ecuador and northern Peru to be less severe than in 1997/1998.

Figures: maps of the deviations of sea surface temperature from normal in September 1997 and 2015. Source NCEP/NOAA.

(note from CNH Tours:  The Galapagos islands can be spotted in the deepest red zone in the 1997 map below, and in a much less intense yellowish zone in the 2015 map) 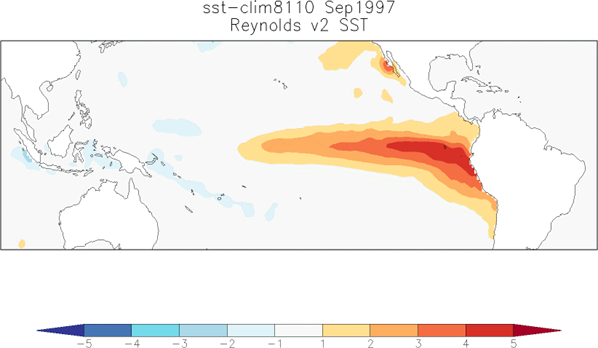