Naturalist Guides Course: View from the inside

CNH Tours has contracted Paula Tagle, a naturalist guide and budding journalist, to produce monthly news items for us.  We've asked her to write about topics that might interest future visitors to the islands.   This month, she writes about the refresher naturalist guides' course she recently attended in the mainland city of Guayaquil.

Every two years the Galapagos naturalist guides attend a course to renew their licenses. It’s a happy occasion to meet old friends, and remember the days when “The Encantadas” seemed to be a pretty manageable archipelago.

However, as daily presentations by scientists are made at the guides’ course, the observations we have made over the years are corroborated.   For example, at least 11 out of 25 of the land bird species in the islands are in decline. A 2014-2015 bird census took place in 20 previously identified vermillion flycatcher territories on Santa Cruz island, and only 4 nests were found, none having any young birds.  On San Cristobal Island – no evidence of the flycatcher was noted.

As for the always rare Mangrove Finch, found only in one small (30 hectare / 75 acre) area on the western shores of Isabela Island, there are only between 80 to 100 individuals remaining.  Meanwhile, the Floreana mockingbirds number no more than 500! The causes are: diseases, predation by introduced animals, habitat loss due to land use change in the inhabited islands, and probably the worst, low breeding success due to the introduced fly, Philornis downsi.

Philornis is outpacing the work done by the National Park Service and Charles Darwin Research Station to try to slow down its impacts.  The fly lays its eggs in bird nests, and when hatched, its larvae feed on chicks and nestlings.  Experts claim that the fly is responsible for 69% of the death of mangrove finch fledglings, and 100% of the vermillion flycatcher fledglings of Santa Cruz Island.

But it isn’t all bad news.

Wacho Tapia, former technical director of the Galapagos National Park Service (editor's note: Wacho is a former colleague and good friend of CNH Tours Heather Blenkiron & Marc Patry) lectures about the Galapagos giants. 150 years ago the Santa Fe tortoise became extinct. As part of a feasibility study to restore the Santa Fe ecosystem, Yale University scientists analyzed the DNA of sub fossilized Santa Fe tortoise bones, collected by the California Academy of Science, and learned that it belonged within the genetic group of the Pinta-Española-San Cristobal tortoises.  These results led to the decision to introduce Española Island tortoises to Santa Fe Island.   On June 27th this year, for the first time in 150 years, tortoises once again roamed Santa Fe, as 201 juveniles raised in the National Park Breeding Center were set free.

The Galapagos Science Center has been conducting applied science and has published a total of 30 papers in the last four years. A plethora of studies ranges from the diet of black rats in San Cristobal, to the foraging behavior of sea lions, while genome studies suggest we could be talking about 17 instead of the 14 species of Darwin’s finches.

We watched a video showing how people risk their lives hanging from tall, thin trees to collect the delicate mangrove finch nests.  The Park and the Charles Darwin Research Station have managed to raise 15 birds in 2014 and 8 in 2015, a total of approximately 20% of the world population of mangrove finches.

I perceived a lot of enthusiasm for Patricia Jaramillo’s, Charles Darwin Research Station plan specialist (editor's note: Wacho Tapia’s wife, and another CNH Tours former colleague) presentation about “Galapagos Verde 2050”, a multi-institutional project for ecological restoration and sustainable agriculture. Seedlings of different species have been rooted at South Plaza, Baltra, Floreana and Santa Cruz islands. This is done through techniques that result in a 90% reduction in normal water requirements, while vegetation grows at a faster rate; Opuntias planted in South Plaza develop five times quicker than in normal conditions

Most naturalists were motivated by Patricia and have volunteered for future campaigns. The course has refreshed our awareness about this delicate environment and about the many who work hard for its better future; it’s been inspirational. 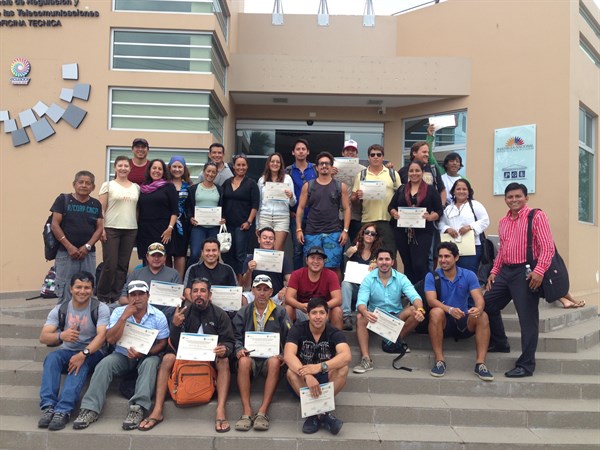