Teetering on the edge of a massive El Nino

The latest sea surface temperature (SST) readings in the Eastern tropical Pacific show a dramatic El Niño (e.g. SSTs much higher than usual) along the equator in the central Pacific (the horizontal centre line of the figure below - sorry for the poor resolution!), but somehow, the warm temperatures show up further north as you approach the South American coast. Southern Mexico and Central America are witnessing very warm coastal waters, but not Ecuador, nor lands further south.  The recent SSTs corroborate similar observations made by our friend Geert Jan van Oldenborgh of the Royal Netherlands Meteorological Institute (see CNH Tours news, 29 October 2015).

The figure below (Galapagos is circled), showing SSTs into the 30C range (orange-red) in much of the Pacific, reveal that the Galapagos waters are in the 22-24C range - just a bit warmer than normal for this time of year (green) - but just on the cusp of being bathed in the much warmer waters further north.

Unusually warm waters are the death knell for ocean dependent species in Galapagos - from marine iguanas, to penguins to sea lions, to flightless cormorants and other sea birds.   With warmer waters, algae disappear and so do much of the food fish on which other animals depend.  Though many visitors are reluctant to visit during an el Niño, we would argue that it's a very interesting time to witness how climate changes serve to "force" biological evolution.

So far, Galapagos has avoided strong El Niño effects.   The cold Humboldt current, coming in from the south (blue), along the South American coastline, appears to be holding back the warm waters furhter north.

Those interested in a scuba diving expedition to Wolf and Darwin islands, apx. 250km north of the main Galapagos island group, would be entering the very warm waters.  Recent reports from divers having been there indicate the relative absence of the iconic whale sharks there - usually a guaranteed encounter. 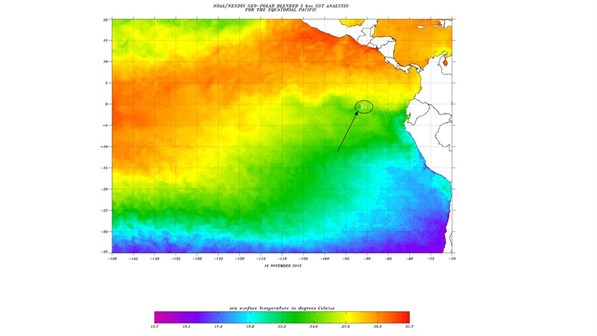