(based on a report from El Colono, the Galapagos daily newspaper)

Yesterday, near the Puerto Ayora gas station, someone spotted a reptile.  This is not unusual in Galapagos – the land of the reptiles – but this was a non native reptile.  The 1 metre long snake (a little over 3 feet) was captured by the biosecurity agency in Galapagos and identified as a boa constrictor, a mainland native.   Most likely illegally brought in as a pet, it either escaped or was released.  The biosecurity agency carried out an extensive search in the vicinity of where this snake was found, in case others might also have escaped or been released.

Marilyn Cruz – my former colleague at the Charles Darwin Research Station, and now the director of the biosecurity agency noted:  “these kinds of events are a constant risk in Galapagos, and that’s why it’s important for the community to be on guard and to report any strange animals in the islands”.

Introduced species are a massive threat to Galapagos wildlife.  Brought over by cargo ships, or in planes, accidentally, or furtively, they can easily disrupt ecosystems and drive native species to extinction.   The brown tree snake, native of mainland Asia, was accidentally introduced on the island of Guam in the Pacific, and it has nearly wiped out all the birds there.    We don’t want this happening in Galapagos. 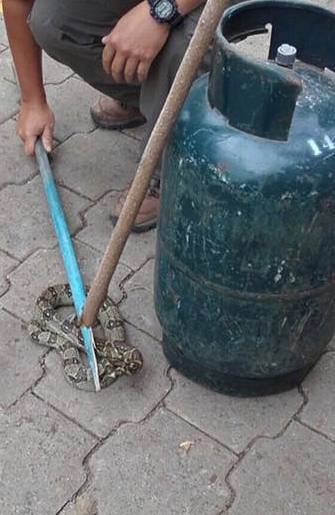