Visit the biggest tree in the islands

Adriana Mesa Vera, who regularly blogs about life in Galapagos, recently reported on a 300 year old Ceiba tree, near Puerto Baquerizo Moreno. If the facts are correct, this tree would be among the first introduced plants in Galapagos (e.g. early 1700’s and would have already been a very large tree when Darwin passed though (1835).   CNH Tours doubts the veracity of Ms. Mesa Verde’s dating – given that the first permanent residents of Galapagos did not establish themselves until the early 1800’s.

The tree is located at El Progreso, about 7 kilometers from Puerto Baquerizo Moreno on San Cristobal Island.  It’s over 40 meters tall (130 feet) with an 18 meter (40 feet) circumference.  Regardless of its age, it remains an impressive specimen!

The owner of the land on which it grows, José Luis Cornejo, Quito had the great idea of ​​building a house in the tree.     The house is now a tourist attraction, containing artifacts from what was a sugar mill located nearby.   Visitors are encouraged to climb the tree as far as they can go – secured with a sytem of ropes and pulleys.

A taxi to the tree takes 10 minutes from the main town, costing about $3. 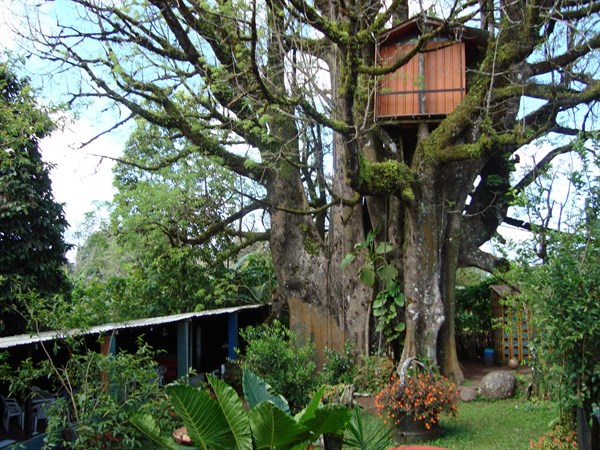