(from the Galapagos National Park press release - with help from Google Translate).

For the second consecutive year, endangered mangrove finches are successfully hatched in captivity.

The mangrove finch project team, led by the Charles Darwin Foundation (CDF) and the Galapagos National Park (GNP), in collaboration with San Diego Zoo ( SDZ) and Durrell Wildlife Conservation Trust, began the process of captive breeding of mangrove finches, with the goal of providing one more chance for one of the most, if not THE most endangered bird species in the world to avoid extinction.

From February 3 to March 3, 2015, 30 mangrove finch eggs were collected in Playa Tortuga Negra, northwest of Isabela Island. Then the eggs were transported 130 km by boat to the Charles Darwin Research Station (CDRS) incubation lab in Puerto Ayora. 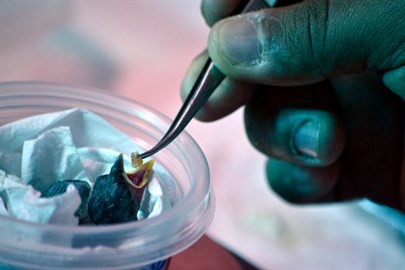 The mangrove finch is the rarest of "Darwin's finches", with an estimated population of only 80 individuals with less than 20 breeding pairs population. Research shows that the introduced parasitic fly, Philornis downsi is a major cause of the high mortality of this species, with no less than 95% of the chicks dying during the first months of the breeding season under natural conditions.  (note from CNH Tours:  This is one graphic manifestation of how the careless introduction of non-native species to Galapagos can affect the wildlife there - after polynesians arrived in Hawaii, followed by others, nearly 50% of its bird species became extinct - something that is desperately trying to be avoided in Galapagos).

An intensive conservation management effort to increase the number of chicks produced each year began in 2014 for the first time in the Galapagos Islands.  Eggs were collected from the wild and transferred to Puerto Ayora, where the chicks were hatched and cared for.  Fifteen of them were successfully released into the wild in May 2014. Due to the small size of the population of the mangrove finch, without viable technique today to protect wild nests from the parasitic fly, the collection of eggs and captive breeding chicks is a strategy that has given successful results, which should be replicated.

After last year’s successful results, this season the team of scientists and rangers faced unexpected challenges in the field.  Francesca Cunninghame, an official of the CDF and leader of mangrove finch Project, explained that "it was exceptionally dry in Playa Negra Tortuga and mangrove finches reproduced slower than normal, therefore, only 12 pairs were seen to be nesting . We also had two days of gusty winds which made it dangerous to climb the tall trees to reach the nests"

The incubation equipment and captive breeding, led by San Diego Zoo personnel Global (SDZG) with the support of Ecuadorian fellows, put the eggs in incubators, located within the quarantine facilities in the CDRS. This year’s crop of eggs hatched during the last two weeks. The chicks are fed 15 times a day on a diet of scrambled eggs and papaya and introduced wasp larvae.

Nicole LaGreco, leading expert in wild bird breeding at  the SDZ Wild Bird that "with the success of last season, we were excited and anxious to be invited to participate again this year. Although this year has been more challenging than the previous year, we hope that this will be another successful season. "

Note from CNH Tours:  The mangrove finches exist only on the shores of a very restricted part of Isabela Island at Black Turtle Cove - this site is accessible only with a special permit from the Park.  It is not a visitor site.