Ecuadoreans marched in the thousands yesterday, in several mainland cities, protesting what they believe is a growing centralization of power in the office of the president (Rafael Correa), reductions in the freedom of the press, and the president's expressed desire to change the constitution (a constitution that he himself promulgated in 2008) which would allow him to be a candidate for the next presidential elections (e.g. removing the two term limit).

Having observed Ecuadorian politics for the past nearly 20 years, CNH Tours was initially very pleased to see the work of the Correa administration when it first came to power in 2006.  Charismatic and intelligent, he seemed to understand the deep rooted challenges in terms of putting the country on the road to development, and sharing the wealth in so doing.   Though he pays strong lip service to the other populist regimes on the continent (Venezuela, Bolivia), generally, he has navigated a balanced path between investment in infrastructure and people, and social policies.

It seems however that he increasingly believes that the changes he has set in motion require his continued presence at the helm, while the tools he is increasingly resorting to are criticized by some as being close to authoritarian in nature.  Apparently, as the country saw yesterday, an important number of Ecuadoreans believe that they don't need him at the helm indefinitely to continue on the road to prosperity and social justice.

Visitors to Ecuador and Galapagos need not be concerned about these developments, but they do offer a good opportunity to learn about politics, social justice issues, development and governance in another country.   CNH Tours recommends you read about these things on-line - and you'll be sure to engage in interesting discussions with the Ecuadorians you'll be meeting during your visit there.

Thanks to our old Darwin Station colleague, Michael Bliemsrieder, for the picture below.  Hotel Gangotena is the nice three story building on the right side  - it is considered among the top hotels in all of Latin America.  In the back ground, Pan de Azucar (Sugarloaf) mountain - with the statue of Virgin Mary on top - a popular visitor site. 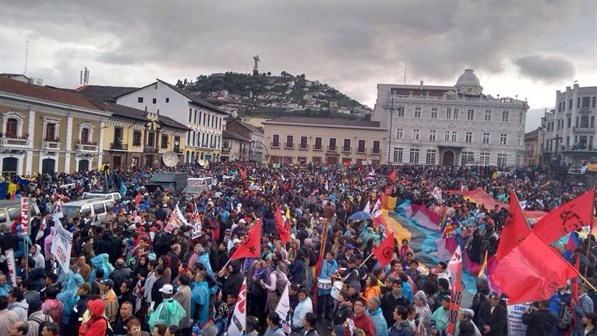