The 16 passenger Tip Top II ran aground in the early morning of Friday, April 24th.  All 16 passengers and crew were safefly evacuated.  A passenger on the ship reported to CNH Tours that one person suffered a broken arm and another a dislocated shoulder.  It ran aground as it was approaching Puerto Ayora on Santa Cruz Island, just near Tortuga Bay beach.  The authorities are now hoping to extract the ship from the shallows to avoid any fuel spills.

Cruise ships in the Galapagos are required to meet strict standards in terms of on-board technology (GPS, depth monitors etc...) rendering any such accident less likely one of navigational error, and more one of human error - though we have not heard anything on the cause of the accident.

I strongly recommend anyone who is booked to go on the Tip Top II in the next 12 months to contact your travel agent to ensure your interests are taken into consideration, as the Tip Top II's owners seek to re-assign booked clients on other ships.

This is the first cruise ship loss in several years.  Generally, the record has been very good in Galapagos - considering that there are at least 60 ships plying its waters just about 365 days a year, day and night,navigating around an archipelago of over 100 islands and islets.

The Tip Top II is owned and operated by Rolf Wittmer Tours.  The late Rolf Wittmer  (deceased 2011) was the first person to be born on Floreana Island (1 January 1933), in cave that together with a tent served as the family’s first dwelling.   His parents had emigriated from Germany just 4 months earlier - what pioneers!  I had the pleasure of working with Rolf's children while in Galapagos.  Rolf Wittmer Tours also runs the Tip Top III and IV. 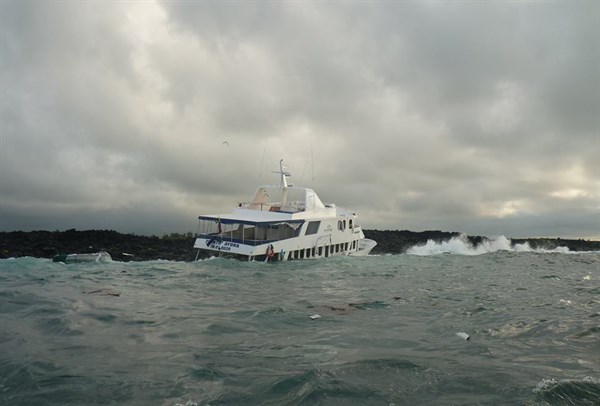