I generally refrain from reporting on the latest American NOAA (National Oceanic and Atmospheric Administration) reports on El Niño predictions, as these tend to be misconstrued when applied to Galapagos. But..... between what NOAA is saying now ("far above average water temperatures for June, July, August in the Eastern tropical Pacific"), and what I'm hearing from my friends in the islands ("we could feel it!"), and a scientist friend currently doing research in the Cocos Islands - about 1000km NE of Galapagos, in reaction to a rare spawning aggregation of pelagic crabs, seen during the 1997-98 El Niño - see picture below ("A signal of a strong El Niño developing? Water here in Cocos is crazy hot - diving without wetsuits to below 100 ft.... ") for the first time since 1997-98, I would say that it looks like an El Niño of some intensity is manifesting itself about now. May is the month that water temperatures go down, while during an El Niño, they don't. Let's see what happens in the coming months.

Below: latest NOAA predictions.  Galapagos lies on the Equator, just off the South American coast, where the greatest deviation from normal temperatures are expected.  Cocos Island lies to the North East. 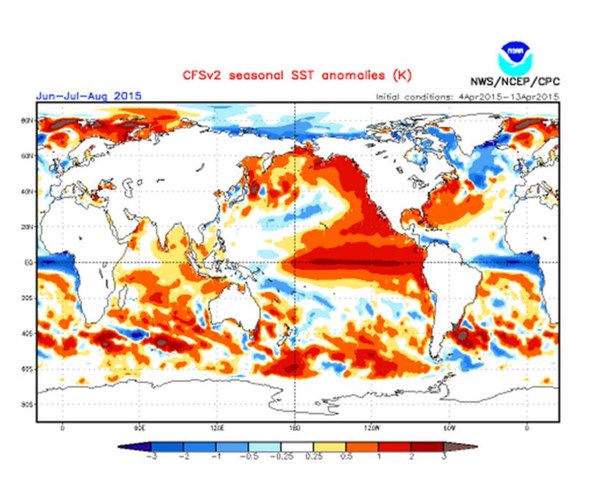 Marine biologist Alex Hearn marvels at the rare spawning aggregation of this off shore (pelagic) crab in the abnormally hot waters around Cocos Island (Costa Rica) a few days ago and wonders if this is an indication of an El Niño to come. Picture by Ian Kellett. 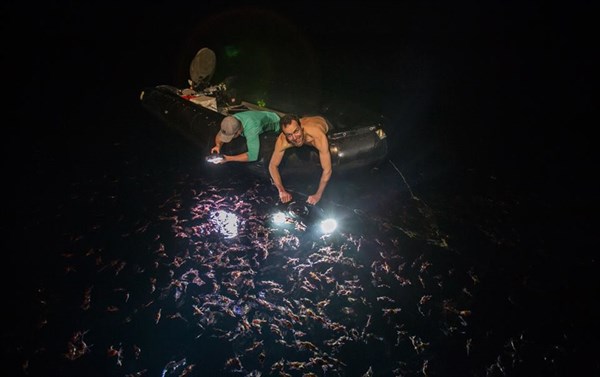