We've just received news of a volcanic eruption at Wolf Volcano, the northernmost volcano on Isabela Island (the largest island).

Wolf is also the highest peak in the Galapagos archipelago, at 1,707 meters (5,600 feet).   A rare pink land iguana lives there - surely they will be affected, as will the Wolf Volcano tortoises.  But that's part of the equation in Galapagos - these islands were born of fire and continue to grow by fire.

Isabela Island and its neighbour to the west, Fernandina island, remain volcanically active, and such eruptions happen every 5-6 years.  They generally are quite impressive for the first few days, then taper off quickly, and ending 7-10 days later.   For those happening to be on a ship nearby, it is a spectacle you'll remember for the rest of your life.

The picture below (by naturalist guide Diego Paredes) was just posted on Facebook - it could be just a few hours old - the time remains to be confirmed. 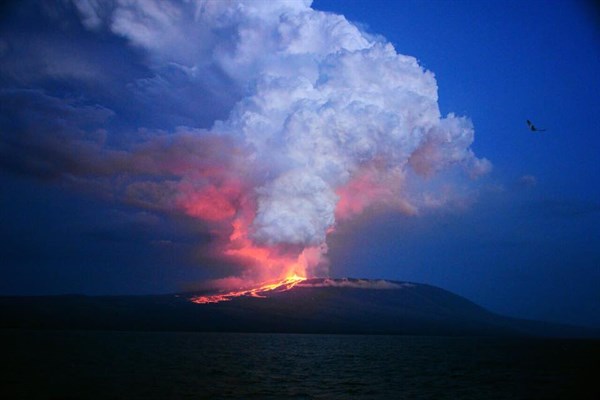