I’m very pleased to announce that as of today, my dear husband, Marc Patry, will be joining me at CNH Tours.   After over 12 years working with the United Nations Educational, Scientific and Cultural Organization (UNESCO), and seeing how I’m getting too busy to cope with all the work,  he decided to make the switch.

Marc was actually the one who started CNH Tours, having organized trips to the Yucatan, Patagonia and to the Monarch Butterfly reserves of Mexico while working for an international community forestry NGO.   When we moved to the Galapagos, he decided to strike out on his own, and as a side activity, he organized a first cruise there for friends, and another for those who had joined him on earlier trips.  His main job was with the Charles Darwin Research Station, where he helped develop and start up the largest ever conservation project in the islands - the eradication of goats from Isabela Island. He worked closely with the Galapagos National Park Service as well.   Marc was also involved in managing several other conservation projects, and helped with the management of the Research Station.

We left Galapagos for Paris (UNESCO headquarters) where Marc was given the responsibility for natural World Heritage sites in Latin America and the Caribbean - which included the Galapagos Islands.  At that point, he had to hand over CNH Tours to me.  For over 10 years, Marc closely monitored the conservation status of the islands, and engaged with senior government officials, conservation organizations, the tourism industry, local politicians and other stakeholders in so doing. He has had several meetings with various ministers of the environment, and he once even had a private meeting with the president of Ecuador to discuss World Heritage issues.

Marc’s position allowed him to travel to Galapagos on several occasions and to be taken around the islands as the United Nations representative for monitoring the islands’ state of conservation.  He was also responsible for reporting in person to the intergovernmental World Heritage Committee on what he saw.

This has given Marc a unique perspective and access to a wide variety of sources regarding the on-going efforts at addressing conservation challenges.  He has frequently been asked to speak to the media, from The Economist, to Al Jazeera, on matters relating to Galapagos.

Update:  As of 2022, Marc has been active on a few tourism and conservation governing bodies :

With Marc at my side, I’ll be able to breathe a bit easier, and we hope to provide even better service than we have so far. 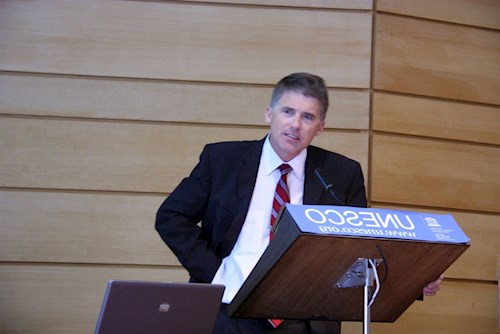