Cotopaxi volcano, the tallest of the many volcanos running up and down the Andean mountains of Ecuador, has been emitting large clouds of gas over the past several days.  Located only 80 km (50 miles) south of Quito, it is the second highest summit in the country, reaching a height of 5,897 m (19,347 ft) and considered one of the highest volcanoes in the world.   On a clear day, it is easily visible from many downtown Quito vantage points.   Seismologists consider the activity level as “low to moderate”.

This active volcano has erupted many times in recorded history, with an average of 1 eruption every 20 years, though the last major eruption was over 110 years ago.   CNH Tours has found no report on previous eruptions significantly affecting Quito – so it would appear that risks to eventual trip to Galapagos, transiting via Quito, are quite low.

Cotopaxi National Park is a popular day trip from Quito – with many visitors hiking in the high altitude plains and foothills.   It is likely that any such trips in the near future may be cancelled. 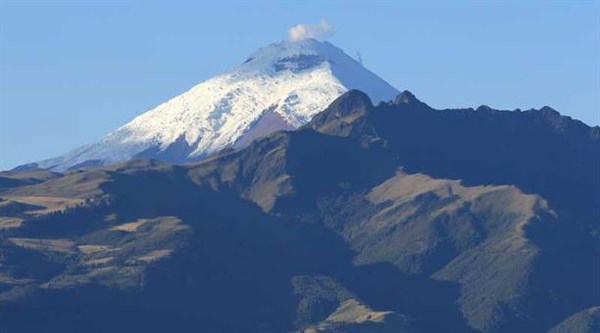