Though it was likely some of the ancestors of this green iguana that ended up stranded on a floating mat of vegetation after some floods, many thousands, perhaps over a million years ago, to make it all the way to Galapagos, but chances are this particulary critter came over the easy way, either on a ship, or by plane.

It's good that the authorities and the Galapagos people are keyed in enough now to i) recognize non-native species and to ii) do something about it.   The discovery of this lovely green iguana is an indicator of a heightened awareness of the dangers these non-native species present to the ecosystems that Galapagos is so famous for.

The increasing number of ships / planes / people moving  back and forth between the continent and the archipelago, and between the islands of the archipelago, are removing the "ecological isolation" of the islands.  It is this ecological isolation that was responsible for the development of new species through natural selection over tens and hundreds of thousands of years.   Boats and planes can turn a remote archipelago into amost a piece of the mainland - allowing all kinds of new species to appear on the islands, upsetting the evolutionary processes in place.

The authorities, with plenty of help from the Charles Darwin Foundation, have been working hard at dealing with this iusse. Visitors to the islands are screened for plants and animals that could harm native ecosystems. So remember, when you are boarding your flight to the islands, leave the green iguana behind. 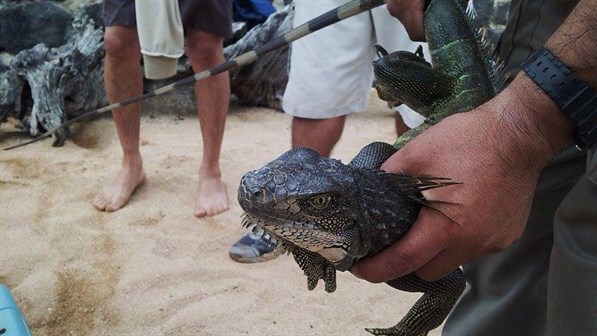