We are proud to announce that at its recent Annual General Meeting, Marc Patry, co-owner (with his wife Heather Blenkiron) of CNH Tours was voted in as a governing member of the Charles Darwin Foundation (the CDF) General Assembly.

Marc's previous work at the Charles Darwin Station (operated by the CDF), helping develop and launch the largest ever alien species eradication project in history (the Isabela Project - eradicating goats from Isabela Island) has given him a good understanding of the CDF and how it works.  Of additional value were his 12 years working as the Latin American point person for natural World Heritage (WH) sites at UNESCO's headquarters in Paris.   He was in charge of monitoring the state of conservation of WH sites and maintaining constructive dialogues with site managers and government agencies responsible for their conservation.   The Galapagos Islands were part of his responsibilities, and thanks to that job, he kept a close tab on management issues, strengthening his network of on-the-ground contacts in Galapagos, while developing a new network amongst senior government officials.

As a governing member of the CDF General Assembly, Marc has proposed to act as a communications conduit beween the CDF and the WH Centre back in Paris, where he maintains good contacts, particularly with his replacement there at the Latin America desk, and with the newly appointed director of the Centre, who was a long time colleague of Marc's.   The WH Convention can play a very constructive role in helping / encouraging national governments to deal with conservation challenges. 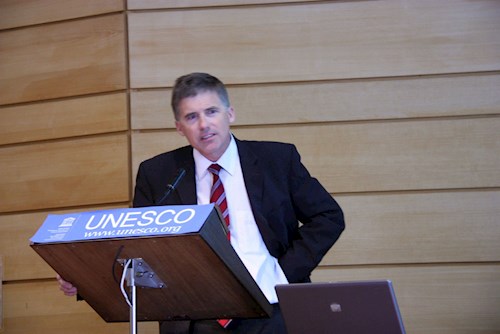