Samba owner and principal guide, Juan Manuel Salcedo, has finally done it.   Back in 2010 or so, the National Park imposed new itinerary regulations for cruise ships.  Whereas they had been previously following 7 night / 8 day loops, returning to the same visitor sites ever week, they now had to adopt a 14 night / 15 day loop, returning to the same visitor site only once every 14 days.

Many ships balked at this new requirement.   Their supply schedules and marketing plans were all based on the 7 night/8 day loop.   They hoped that with enough resistance, the park would relent.   But it didn't.  The park wanted to reduce the visitor load at the visitor sites - as the ships tended to go to those sites that offered a combination of appeal and navigational practicality.

Juan Manuel Salcedo, instead of balking, saw an opportunity.  He quickly drew up a 15 day itinerary he considered ideal.  Because he was one of the first to have done so, the park readily approved his plan, with minor modifications - the most important of which was switching his request for a snorkeling visit at Devil's Crown, with "the Loberia", at Floreana, a beach visit with swimming and some relatively unexciting snorkeling.

"The NW itinerary on the Samba is, as I have often said here, my absolute favorite one to date... I agree that not going to Devil's Crown is probably the only disappointment on the Samba's NW itinerary."

But after a few years of efforts on the part of Juan Manuel Salcedo, he was finally granted what he had originally requested, and starting in 2016, the "Loberia" visitor site is now replaced with a snorkel at Devil's Crown.

Devil's Crown is a submerged volcanic cone, with only partial remains of rim emerging from the sea.  A combination of vertical submerged walls, varying sea depths, areas of protected waters, and areas subjected to marine currents have made for a diverse marine environment here, where many fish can be spotted, rays and sharks are not uncommon, and sea birds dive for prey.   We're glad that we can now earn Tina's full endorsement for the NW itinerary!

Devil's Crown - thanks to Google Earth.  Located off the northern shore of Floreana Island.

Devil's Crown - a close up. 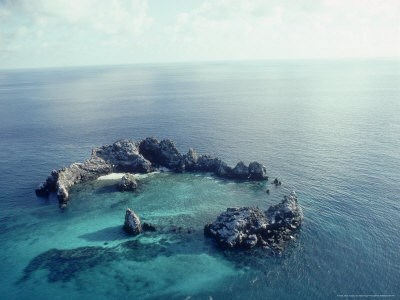