The University of Washington reported (March 17) on the results of Galapagos lake sediment analysis.  In summary:

"Results show that from the beginning of the record 2,000 years ago, until the year 1400, most rainfall changes on the island were indeed related to El Niño.

The record also shows long-term shifts. Heavier rainfall at the study sites from the year 0 to 400, and again during Europe’s Medieval Warm Period, just before the Little Ice Age from about the year 800 to 1300, was probably caused by a centuries-long strengthening of El Niño.

But during the Little Ice Age, a period from roughly 1400 to 1850 when temperatures in Europe were cooler and many of Earth’s glaciers expanded, the biggest changes came from the Intertropical Convergence Zone shifting to the south.

Recent research has shown that the position of the Intertropical Convergence Zone, and the associated rainfall and drought, is tied to the temperature balance between the Northern and Southern hemispheres.

“It’s consistent with what we understand about the changes in the ITCZ that it might have been positioned further south when the Northern Hemisphere was cooler,” Nelson said."

The lake at Tagus cove, on the western shores of Isabela Island - with a larger cruise ship anchored at the cove.  On the horizon, the gentle rising slope of Fernandina Island appears, across the Bolivar Channel.  These waters are cooler, and nutrient rich, attracting sea birds, marine mammals and .... tourists! 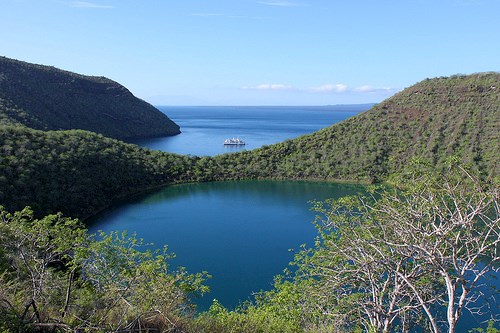