El Nino report: Much ado about nothing?

Figure 1:  Galapagos is located in a white zone - indicating very close to average temperatures.  The warmer temperatures (but not extreme) are found west of the archipelago. 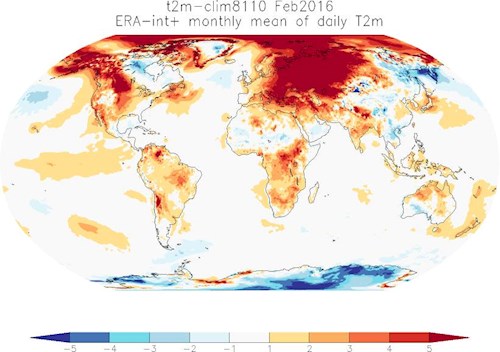 The Eastern Tropical Pacific shows just a bit warmer than average temperatures - leading me to conclude that the El Niño event is dissipating.  A review of the US National Oceanographic and Atmospheric Administration (NOAA -a very good government agency) corroborates this situation.   Based on the evolution of the phenomenon over the past several months, it seems that this El Niño affected ocean waters to the north and west of Galapagos, and largely by-passed the islands.  It also seems that the worst of it is behind us, as the predictions are for El Niño to dissipate in the next several weeks.

Our local sources indicate the same - that the waters warmed up just a little more than in a usual year, and that the rains were not any worse (in fact, some are noting a distinct absence of rain recently).   Figure 2 below shows the average temperatures for February 1998, the last time a severe El Niño hit the Galapagos.   I was there in April, and can attest to the "steam room" conditions of the islands at that time.   Our principal guide and partner, Juan Manuel Salcedo, sent us a note from the islands a few days ago:

The strong El Niño forcast for this year has failed to arrive.  It is early yet to know if El Niño will strike and how strong is impossible to know. Unfortunately a lot of the news are sensationalist about it and have influenced travellers' choices.  So far the only affected species in Galápagos have been marine iguanas, and they are coming back well after the water has cooled down again. 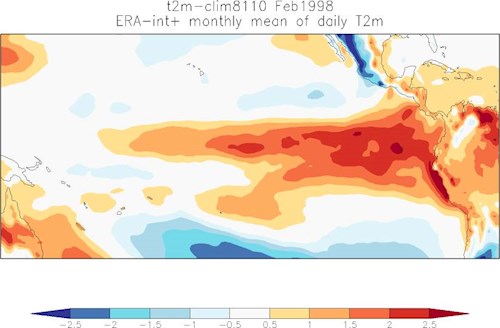 Based on all of this, and based on nearly 20 years of personal observation, I'm predicting that this El Niño event is over, and that it did not affect Galapagos significantly, as was feared just a few months ago.