On Friday last week, the Government of Ecuador named 30 year old naturalist guide Africa Berdonces as the new Park director, replacing the current interim director who himself replaced a director who had been in place for barely a year.  That's 4 directors in about 18 months.   Back in the early to mid-2000's, the park went through over a dozen directors and interim directors over a 3-4 year period.   The post is a politically sensitive one, as the director reports to the Minister of the Environment - a political appointee.  It's a difficult situation, when conservation priorities may not always fall in line neatly with political ones.   Back in 2008, then director Raquel Molina was fired in 2008 over such conflicts.

Africa, the second woman Galapagos director is taking on a challenging job.  Not only will she need to oversee the management of a large government agency, having to deal with a large staff and all kinds of infrastructure and equipment, but she'll be constantly under the watchful eyes of international conservation organizations forever monitoring events in the islands.  She will also need to deal with the increasing local population, most of which has little direct interest in conservation matters, yet who feel that the National Park may be limiting economic development opportunities.

The New York Times published an article on Berdonce today - in it, they mention her father, a scuba dive shop owner an acquaintance of ours when we were living in the islands.  They also interview Susanna Schiess, mother-in-law of CNH Tours main partner in the islands, and top guide, Samba co-owner and principal guide, Juan Salcedo.   Susanna owns the Garrapata restaurant, one of the main town's landmarks, and often the site of our CNH Tours Active Galapagos "farewell dinner".   For the full article, click here.

CNH Tours is pleased that the new director is someone with an intimate knowledge of the islands, having been raised there and having spent years navigating the archipelago.   Recent appointments of career government technocrats did not inspire confidence.  Ms. Berdonce is young - and running a complicated organization such as the Galapagos National Park Service will certainly present her with challenges she's not confronted before - but we do wish her all the best. 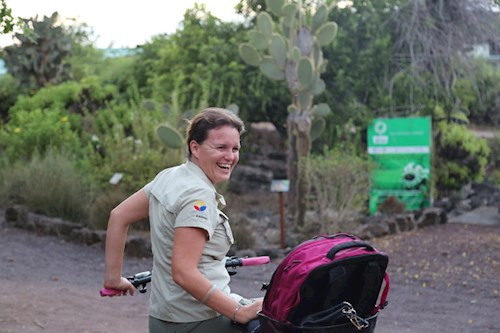