(thank you to the UK based Durell Wildlife Conservation Trust who published this story yesterday.  CNH Tours adds that there have certainly been earlier extinctions, but this would be the first recorded one since the arrival of humans in the islands).

The vermilion flycatcher (Pyrocephalus rubinus) is a widespread songbird found in North and South America and in the Galápagos Islands. This beautiful and distinctive bird has traditionally had several recognized subspecies including two in the Galápagos. A recent study, however, has now confirmed that these two Galápagos forms should be elevated to two full, distinct, species P. nanus (throughout Galápagos) and P. dubius (only on the island of San Cristóbal). The excitement of the presence of two ‘new’ species in the islands is reduced by the fact that it appears that the San Cristóbal flycatcher has become extinct. This would represent the first documented extinction of a Galápagos-endemic bird species.

The vermilion flycatcher has been declining before our eyes throughout most of the Galápagos islands in recent years. Birgit Fessl (a former Durrell field programme member) reports it has disappeared from San Cristóbal and from Floreana while in Santa Cruz its status is critical with a population estimated at only 50-60 individuals. In Santiago few were found recently and in Isabela numbers are not clear with healthy populations in some places but none in others. In 2012, Durrell and Galápagos Conservation Trust chose the vermilion flycatcher as the focus of a joint Christmas appeal to raise funds for landbird conservation in the islands.

So, why is the vermillion flycatcher in such obvious peril? It is not yet clear but many landbirds are badly impacted by two invasive threats; black and brown rats and the parasitic fly Philornis downsi. Rats climb into the nests and eat the eggs and if any chicks do hatch the parasitic flies kill the growing chicks.

Durrell has worked in partnership with the Galápagos National Park Service and Charles Darwin Foundation since 2006 to save what were thought to be the rarest birds in the islands, the mangrove finch and Floreana mockingbird. Both these birds have been pushed to the verge of extinction by invasive rats and flies. Sadly other songbirds have declined too including the flycatcher. The new study has shown that, with the loss of a species that hadn’t even been fully identified, this is a fight we need to win soon or the biodiversity of these magnificent islands will be lost for ever. 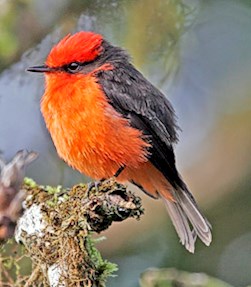 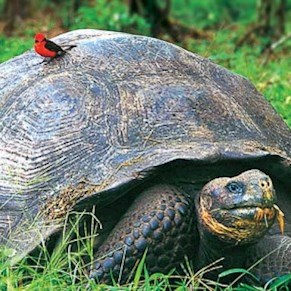