United Nations says (land based) tourism out of control

This report represents the global community's word on the current conservation concerns in Galapagos, as expressed via formal United Nations channels.   The report is based on information gathered directly through site visits, provided by various observers and NGOs, and also obtained from the government of Ecuador's self-assessment, sent to UNESCO back in February this year.    The report also includes specific recommendations for action directed to the Government of Ecuador, to ensure that this World Heritage site maintains the values for which it was originally allowed onto the World Heritage List, back in 1978.

The report raises concerns over the following points:

1) Alien species:   "alien invasive species remain a threat to the property and biosecurity management and control continue to require consolidation"

2) Rapid tourism growth:  "Annual visitor numbers have been exceeding 200,000 since 2013, compared to around only 40,000 in the early 1990s, and the State Party reports 215,691 visitors in 2014 and 113,613 visitors in only the first semester of 2015. Such rapid growth in a fragile island setting raises concerns that are further exacerbated by the limited enforcement of the existing regulatory framework...  A clear tourism strategy ... to discourage rapid and uncontrolled growth... is still lacking".

CNH Tours notes that the increase in tourism numbers is almost exclusively linked to land based tourism model, as the ship based tourism remains relatively capped.  In its report on 2015 tourism numbers, the government noted a 3% drop in ship based tourism, compared to an 8% increase in land based tourism.  To see the full report (in Spanish), click here.  In the 1990's, the vast majority of visitors to Galapagos embarked on a cruise.  According to the report, only 32% of visitors took a cruise in 2015.  This trend is driven in large part by the increasing popular appeal of a Galapagos vacation on the part of lower end travellers, combined with the increasing prices of a cruise based visit, making that kind of visit out of reach for many.

The report goes on to note:  "Six years after the removal of the property from the List of World Heritage in Danger, ...several ...  challenges still remain unresolved, including the development of a clear tourism strategy".

I used to work for the UNESCO World Heritage Centre and can attest to the critical importance attributed to a very rigorous biosecurity capacity for the islands.  This means i) keeping alien species out in the first place; ii) being able to detect their arrival rapidly as a 2nd component and iii) having the capacity to eradicate or control existing alien species.

The only real threat is that which comes from the arrival of new species, which can lead to the extinction of unique Galapagos species.  Just last week, we reported on the extinction of one of the Galapagos Vermilion flycatcher sub-species.   As I write, the Darwin Finches are in their fight for survival faced with the devastating onslaught brought about by the Philornis downsii fly, which lays eggs in the finches' nests, and whose larvae can kill the finch chicks before they fledge.  It is not a coincidence that, after surviving in the islands for hundreds of thousands, even millions of years, the Darwin Finch might become extinct little more than 200 years or so following the first human settlements there.  Which species is next?

The arrival of new species is inextricably linked to the presence of humans.  The challenge is to break that link. One way to do so is to minimize the movement of people and goods between the islands and the continent, and between the islands themselves.  The rapid growth of tourism is working against that effort.   Hence, UNESCO's call for a clear tourism strategy.  This strategy should focus on a high value low numbers tourism model that contributes most to the economic needs of the local population while reducing the dependency on mass tourism model that exacerbates efforts at controlling the arrival and dispersal of invasive species.

The full UNESCO report can be consulted here 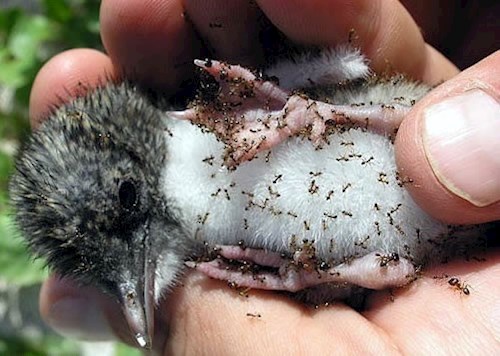