More guides in the pipeline - will they be good?

Yesterday, the governor of the Province of Galapagos, Eliecer Cruz (an old friend, former boss) tweeted "good luck" to the large number of aspirants taking the entrance exam to the Galapagos Naturalist Guide course. The 350 or so hopefuls (see picture below - a similar exam is being held in each of the three main towns of Galapagos) are pictured below.  All are Galapagos residents. To be a Galapagos Naturalist Guide, the course is mandatory - only those having successfully completed it are certified and can be hired by cruise ships and tourism companies. 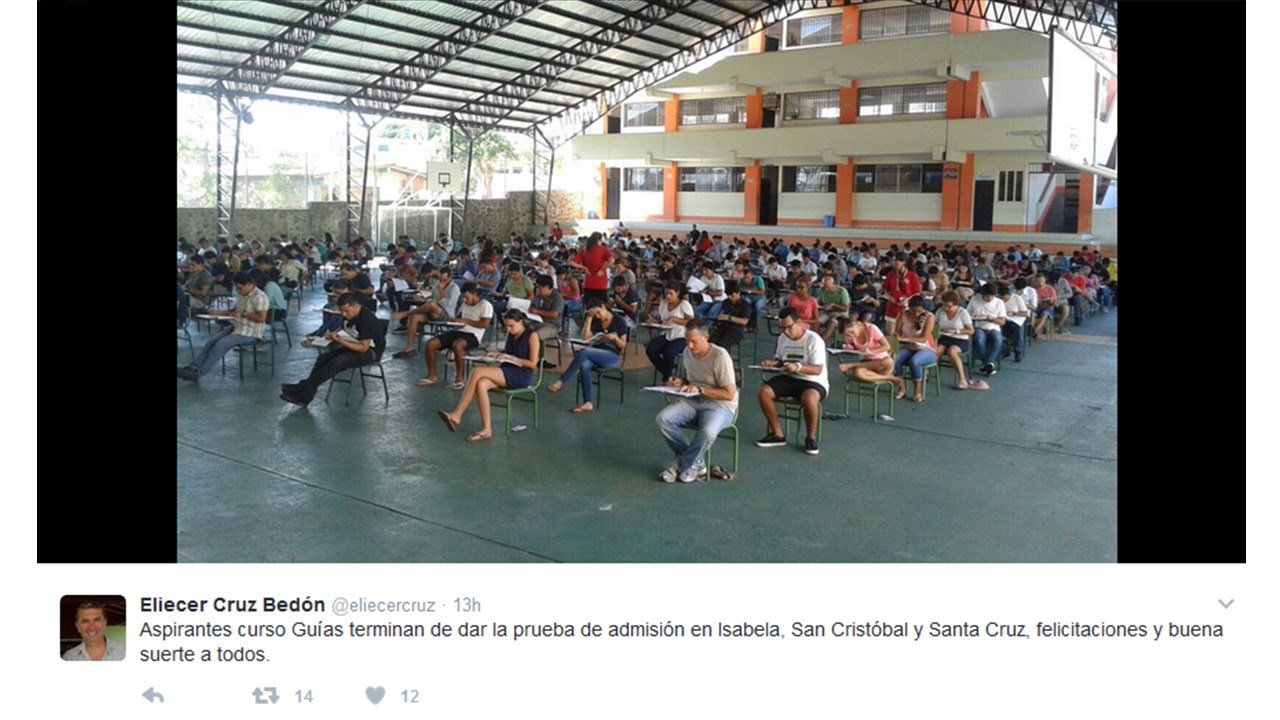 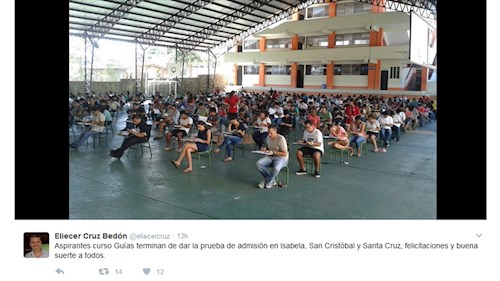 In the early days (e.g. until 1998), just about anybody on the planet could consider becoming a Galapagos Naturalist Guide.  Many passionate and well educated young adults were hired - both Ecuadorian (an old Quito friend of mine passed the course - but never guided.  She is now a doctor in Quito;  another is the Darwin Station director - a mainland Ecuadorian).   As a result, a good many of the older guides are from the mainland or from overseas - I know several American and British naturalist guides, for example. But the youngest of that crop is about 47 these days.

As of 1998, with the passing of the first "Special Law for Galapagos", the islands were given a special status, in which jobs could only be offered to Galapagos residents, and only in the case where no resident could be found, could a job be offered to a mainland Ecuadorian. This spelled the end of foreign, and even mainland naturalist guides.

It has been several years since a Naturalist Guide course has been held. Various forces have delayed the holding of a new one - mainly, the 1,000 or so existing guides who don't like to see new, young competition joining their ranks. But other forces have been lobbying for the course - namely the aspiring young Galapagos residents hoping to join the rather elite ranks of "certified Galapagos Naturalist Guides". Being a guide in Galapagos (for the hard working, good ones) can be a ticket to a good job with a decent salary in a place where these can be scarce.

As for the ship owners - they can be ambivalent. While they are keen on new guides, they are not so keen on just a whole bunch of low quality new guides. They would like to see the guide's course opened up to mainland Ecuadorians - but politically, and under the Special Law for Galapagos, this is very difficult to do. The locals want to keep this opportunity to themselves, reducing the competition from the much larger pool of mainlanders.

Indeed, a quick assessment of the pool of potential guides in Galapagos shows that it is very shallow. The last census of the islands (published in November 2016) indicated a total population of 25,244 (in 2015). The population distribution (many children) the comparatively low level of post secondary education, and the overall absence of English language skills alone likely reduces this pool to a very small number of potentially good guides.

Though good for Galapagos residents, this formula presents a challenge to the tourism interests in the islands.  Too many mediocre candidates risk being admitted, weakening the overall quality of the Naturalist Guides pool.

At CNH Tours, we emphasize the importance of having a top quality guide as part of your cruise experience.  When considering cruise options for our guests, one of our main concerns is the reputation of the guides that a particular ship owner hires.  You can be on the most luxurious ship with the greatest itinerary, but if your guide is dispassionate, your trip will be tainted.

Though we are sure that many very good guides will emerge from this course, we remain concerned that the new crop of top guides won't be able to keep up with the natural attrition of excellent guides currently considering retirement.   We would very much like to see the guides course opened up to mainland Ecuadorians as well.