A take on this weekend's national elections

Shamelessly copy/pasted from The Economist.  I once met The Economist's "man in Quito" while working for UNESCO.  I have since been a paid subscriber to this well rounded magazine.

What to expect from Ecuador’s elections

Under Rafael Correa, living standards rose. But he governed with a heavy hand and leaves a lot of problems for his successor 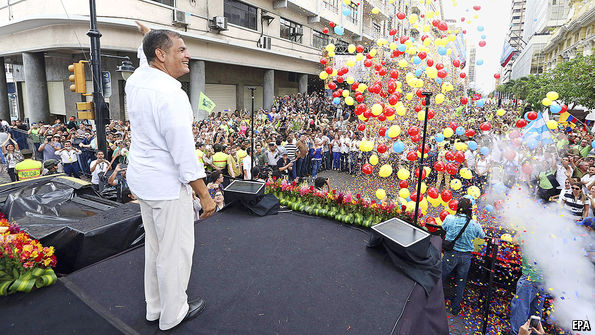 From the print edition | The Americas

WHEN Rafael Correa first ran for Ecuador’s presidency in 2006, supporters at his rallies brandished belts in homage to their candidate, whose surname means “belt” or “strap”. “Dale correa,” or “give them a whipping,” the crowds roared. It was a demand to punish what they regarded as the corrupt elites who had governed Ecuador since the return of democracy in 1979. Mr Correa promised he would. He won that election and then two more. His presidency brought a rare spell of political stability. Living standards rose and public services improved. But few would say that he kept his promise to clean up government. This year’s national elections, which begin on February 19th, are shrill with accusations of corruption.

Mr Correa, who has a respectable approval rating of 42%, is not a candidate. He is counting on Lenin Moreno, a former vice-president, and his running mate, Jorge Glas, the current vice-president, to carry on his “citizens’ revolution”. Mr Moreno, who shares his alarming first name with 18,000 other Ecuadoreans, hopes to win in the first round by capturing the bulk of Mr Correa’s support and adding to it. To do that he must get more than half the votes or, failing that, at least 40% with a gap of ten percentage points over his nearest rival.

That may not happen. Although Mr Moreno is ahead in the polls, he has been hurt by revelations that he sought from Ecuador’s government a budget of $1.6m a year during his three-year stint as the UN’s special envoy for disability (he has used a wheelchair since he was mugged in 1998) plus $3.9m in travel expenses while he was vice-president. If Mr Moreno falls short, a president from right of centre could bring a decade of correísmo to an end. 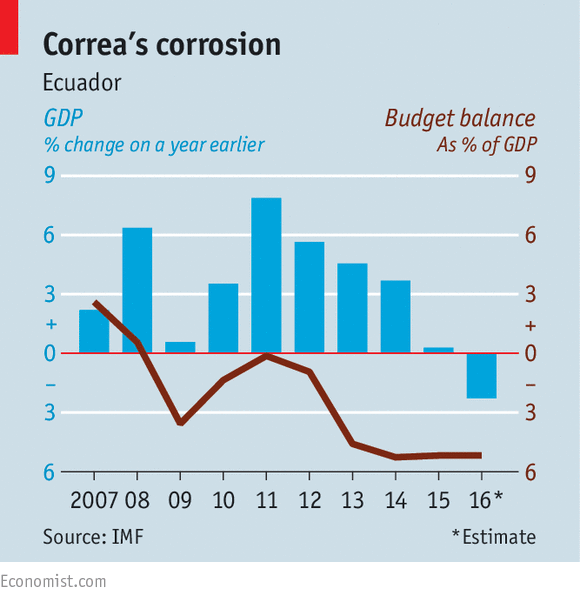 Whatever the outcome, Ecuador’s 16m people face greater uncertainty. The halving since 2014 of the price of oil, the country’s biggest export, has pushed the economy into recession and widened a hole in the budget (see chart). Alianza PAIS, the “movement” Mr Correa created, may retain its legislative majority in the elections, but probably as a weakened force. Ecuador’s next president will not be able to afford Mr Correa’s largesse and may not exercise his unchecked power. Ecuadoreans will find themselves tightening belts rather than waving them.

By the standards of left-wing Latin American leaders, Mr Correa has not fared badly. Some $300bn flowed into government accounts during his presidency from oil revenues, higher taxes and fresh borrowing. He used some of that to build “21st-century socialism”, which in practice meant splashing out on roads, schools, clinics and social housing. Social spending doubled as a share of GDP between 2006 and 2012; the minimum wage went up sharply. Mr Correa did not strangle growth and spur inflation with price controls, as Hugo Chávez and Nicolás Maduro did in Venezuela. Ecuador’s adoption of the dollar in 2000, after its currency collapsed, contained Mr Correa’s radicalism.

Between 2006 and 2011 Ecuador had the world’s most “inclusive” economic growth, according to ODI, a British think-tank; incomes of the poorest 40% of Ecuadoreans grew by eight times the national average. The poverty rate, which started falling in the early 2000s, came down further, from nearly 40% in 2006 to less than 23% in 2016.

But Mr Correa’s spree left the economy vulnerable. Government spending doubled to a peak of 44% of GDP in 2014. Public debt has trebled to more than 50% of GDP since the global financial crisis. Having defaulted on its debt, Ecuador pays close to double-digit rates to borrow, largely from Chinese lenders. Mr Correa is trying to replace lost oil revenue with foreign investment but the climate is forbidding. In the World Bank’s ranking of 190 countries by ease of doing business, Ecuador ranks 114th. The recession is beginning to hurt ordinary folk. Employment fell by 244,000 in 2016 and the poverty rate is edging higher.

Ecuadoreans paid a high price for material progress in the form of creeping authoritarianism and continued corruption. Campaigning in 2006 Mr Correa vowed to “depoliticise the courts”. In effect he seized control of them. A commission led by a former interior minister disciplines and often removes judges. Mr Correa made war on a critical press. He set up a regulator that harasses newspapers and radio stations by levying fines, often for such lapses as failing to cover a mayor’s speech.

His building programme produced backhanders and white elephants as well as useful infrastructure. New and rebuilt airports which failed to attract commercial traffic have closed. Odebrecht, a Brazilian construction firm that bribed officials across Latin America, paid $33.5m to Ecuadorean officials between 2007 and 2016, according to the United States Department of Justice. Mr Correa has said that his name, and that of Mr Glas, are likely to appear on the Justice Department’s list of officials bribed by Odebrecht, but insists that is part of an American plot to undermine him.

It is Mr Correa’s failures, not his successes, that are setting the tone for the elections. Voters are most worried about the recession and the rise in unemployment. Much of the heat in the campaign comes from anger at Mr Moreno’s lavish spending and accusations of corruption levelled at Mr Glas. One alleges that he took kickbacks in connection with a hydroelectric-dam project. He denies wrongdoing.

Mr Moreno is promising voters a softer-edged correísmo. He entices them with budget-busting promises to treble a cash benefit for the poor to $150 a month, raise pensions and build “housing for all”. If he fails to win in the first round, the anti-Correa vote, now split among seven candidates, may coalesce around the other survivor of that ballot. The leading contenders have promised to undo much of Mr Correa’s legacy. They agree on the need to restore judicial independence, strengthen human rights and curb the budget deficit.

The likeliest candidate to join Mr Moreno in the second round is Guillermo Lasso, a conservative banker from the coastal city of Guayaquil who was runner-up in the 2013 presidential election. Though his foes brand him an out-of-touch plutocrat, he sees himself as a challenger to old-style business oligarchs from his home town. He has promised to eliminate red tape and to cut taxes by $3bn, which may clash with his plans to shrink the deficit.

His rivals for a second-round spot include Cynthia Viteri, the nominee of the centre-right Social Christian Party, which represents Guayaquil’s elite. The anti-Correa left has united around Paco Moncayo, a former mayor of Quito.

Opposition parties failed to present a unified list in elections to the national assembly, increasing the chances that Alianza PAIS will retain control. That could make it harder for the next president to enact reforms, especially if it is not Mr Moreno. Mr Correa is leaving the scene, at least for now. His belt-brandishing style of politics may not.