This article appeared in the New Yorker recently - explaining how biological control might be the best way to deal with the Philornis downsi parasitic fly (introduced accidentally to Galapagos years ago),which lays eggs in birds' nests, and whose larvae feed on chicks, most often killing them.   It's not a pretty story, and it's one that the Darwin Foundation has been working on as well.   It's also a good example of how apparently harmless organisms (in this case, what looks very much like a house fly) can be responsible for the extinction of iconic species.   Cross your fingers!

Below, three Philornis downsi larvae feed on a Galapagos finch chick (thank you to the Darwin Foundation for the picture) 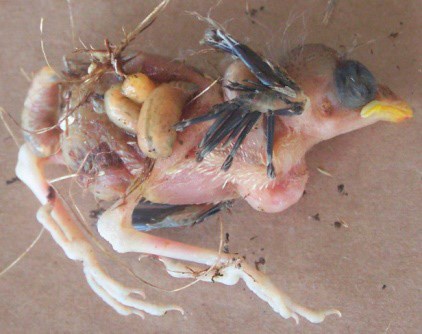