Five years ago, an enterprising business person obtained a permit from the municipality of Puerto Ayora (the main town in Galapagos) to build a house on the “other side”, that part of town accessible only by water taxi.   The other side is the sleepy / quiet side of Puerto Ayora – it currently boasts a few dozen houses, a restaurant and one hotel (the Finch Bay hotel – built long ago).   As the construction of the house began, residents became suspicious.  It soon became obvious that this was not going to be a house, but a hotel.  The construction showed about 20 rooms, each with private bathrooms.   The developer hoped to use an old trick:  i) Get a cheap and easy building permit for a house, ii) build a hotel very quickly (which would not have been allowed in that part of town to start with), and ii) deal with any criticism the usual way, including most likely a few bribes at the right places and arguing that it was a misunderstanding, but now that it is built, we might pay a small fine and start operating.  (story continues after picture)

House or hotel - what do you think? 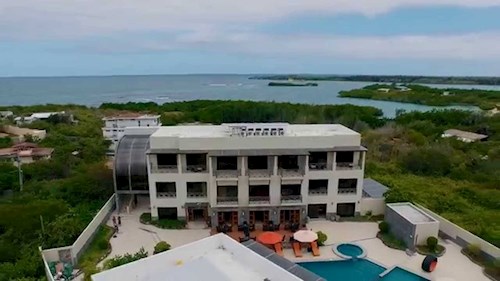 Unfortunately for the developer, Galapagos residents soon became aware of what was happening, and they raised a ruckus.   The project became the poster child for anti-corruption champions, for conservationists and contributed to the growing resentment felt by citizens feeling that the rich and powerful had a whole different set of rules applied to them.   The case was even reported to the United Nations.

The developer was hoping to catch the “land based tourism” wave that started in Galapagos 15 years ago, showing no sign of abatement yet.   While only about 5,000 visitors came to Galapagos with no intention of taking a cruise in the late 1990’s, that number is now nearing 200,000.    The pressure to take advantage of this growing economic opportunity translated into a lot of unregulated development (hotels, bars, restaurants, rooming houses, day trip operators).   Government authorities have been playing catch up for years, forever being behind the ball.  While some progress has been made in terms of regulation / safety / management, there is still no vision on how things should go from here, with numbers continuing to increase.

As for our hotel owner, his project was stopped by authorities.  They didn’t have him tear it down (what many people wanted) but opted to call for a full environment Impact study.   That study was presented to Galapagos residents yesterday and feedback will be possible over the next few weeks.    Let’s see what happens.