Ecuador will seek US$36 billion in damages caused to the Galapagos Marine Reserve (a World Heritage site) as part of its case against the owners of the Fu Yuan Leng 999, which was caught illegally crossing the Marine Reserve, with 300 tonnes of fish in its holds (including a large number of sharks) earlier this month.

The case has made headlines around the world, while in Ecuador, both locals in Galapagos and on the continent have organized rallies against illegal fishing.  Thanks to satellite monitoring of fishing vessels, this case has brought to light the fact that massive fishing fleets are operating in international waters, just outside the Galapagos Marine Reserve, hoping to scoop up fish that move outside its boundaries. 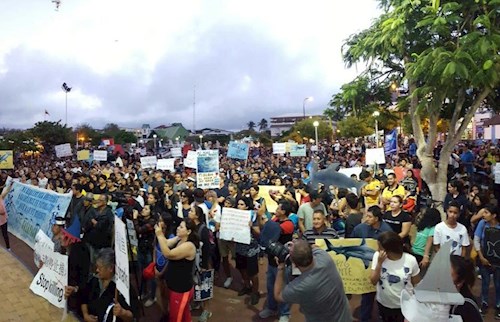 According to local media, the Fu Yuan Leng 999 is one of a fleet of 300 cargo ships that is operating around the marine reserve, each attended to by up to 30 small fishing vessels.  These small ships travel up to 30 km away from it, fill their smaller holds with fish, and bring them back to the mother "cargo vessel" for refrigerated storage, only to head back out again.   They can enter the reserve undetected.

Ecuadorian authorities claim that this fleet is responsible for impoverishing biodiversity in Galapagos.  Currently, 20 crew members of the Fu Yuan Leng 999 are being in held in Galapagos for the trial that started this past Friday.

CNH Tours hopes this case will shed light on the massive amount of uncontrolled fishing taking place in the high seas fishing, particularly close to marine reserves and strengthen efforts at bringing sustainable fishing practices throughout the industry.  To be taken seriously, Ecuador will have to show that it is also just as tough with illegal fishing taking place by its own fleet.