Not dead yet! Extinct tortoises being brought back to life...

An article published today in the very presitigious scientific journal "NATURE" describes how very close relatives to Galapagos tortoise species once thought extinct (Floreana Island and Pinta Island tortoises) were found to be living and thriving on the slopes of Wolf Volcano (Isabela Island).  Scientists carried out genetic tests and discovered a number of individuals that not only had elements of the classic saddle-backed shell shape typical of dry low altitude islands (such as Pinta and Floreana), but also had clear genetic fingerprints from these same extinct tortoises.

32 of these tortoises have been transported to a captive breeding centre in Galapagos and over the years, they will be bred in such a way as to focus on removing genetic traces of the Isabela island species with which the Floreana tortoises had mixed.    In the words of the scientists:  "A genetically informed captive breeding program now being initiated will, over the next decades, return C. elephantopus tortoises to Floreana Island to serve as engineers of the island’s ecosystems".

For the full article click here.  (you will appreciate the article more if you've had some training in genetics...).

Image below from Nature journal. 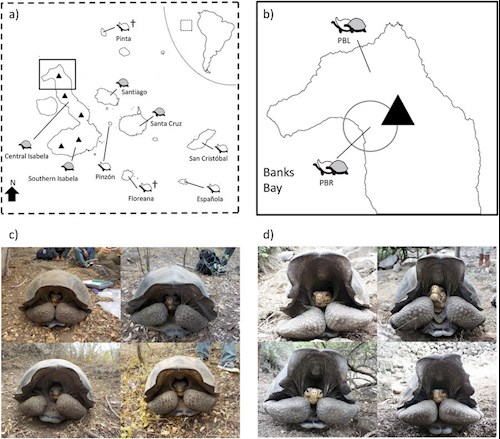