When sharks have lawyers...

ollowing the recent big news in Ecuador over the seizing of a Chinese ship carrying over 6,000 mostly endangered shark carcasses, we asked our old friend Hugo Echeverría, a lawyer who nearly singlehandedly helped raise the profile of wildlife law in Galapagos and Ecuador, to give us his perspective of the case.   Thank you Hugo!

WHEN SHARKS HAVE LAWYERS

A case about shark’s protection in the Galapagos Marine Reserve

On August 13, 2017, a ship of Chinese flag was intercepted by Ecuadorian authorities. It was intercepted east of San Cristobal Island, 34.5 nautical miles inside the Galapagos Marine Reserve. It was a vessel of 98 meters of length and 16 meters of breadth. A cargo this size is not something you normally see in Galapagos waters. 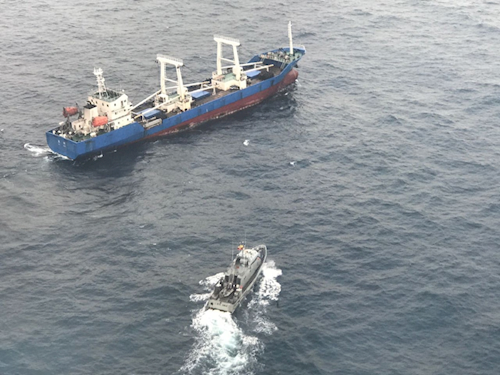 Upon inspection, 300 tons of fish were found in its hull, including 6223 sharks of different species, most of them mutilated. 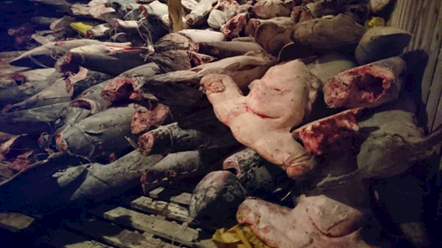 The Galapagos Marine Reserve is a natural protected area since 1998. Due to its outstanding universal value, the site was included in UNESCO’s World Heritage List in 2001. The legal framework applied in the Galapagos Marine Reserve is based upon rules on wildlife protection, including the application of penal law: In this protected area acts that affect marine species, including possession and transport, are considered as environmental crimes. 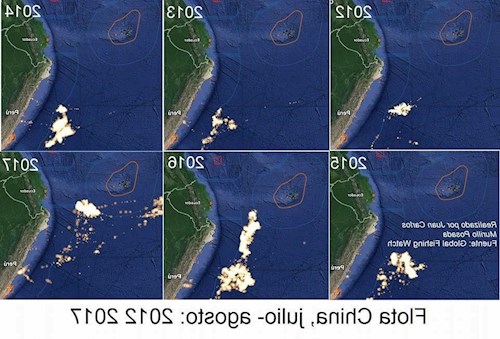 After interception, the ship was directed to San Cristobal Island, where a trial took place. During judicial hearings, it was established that the ship not only entered the Galapagos Marine Reserve without authorization but it also possessed and transported sharks of endangered species that are protected by Ecuadorian law and environmental treaties. On August 27, 2017, a guilty verdict was issued: The captain and crew were found guilty of illegal possession and transport of endangered species through the Galapagos Marine Reserve.

In Ecuador, Nature has constitutional rights

Since 2008, the Constitution of Ecuador grants rights to Nature. It is a unique juridical perspective, which has been embraced by Ecuadorians, especially among the young.  Ecuadorian society was taken by surprise by the massive popular outcry resulting from this case, with organized demonstrations in the streets of cities on the continent and in Galapagos. A greater social reaction emerged once it was informed that the ship belonged to a immense fleet, of some 300 vessels, located at high seas but just outside the Ecuadorian Exclusive Economic Zone. It was a nation-wide reaction.

In Ecuador, this case was labelled by the press as the ¨case of the century¨. This case certainly provides important lessons: the legal relevance of international standards on protection of endangered species; the intrinsic value of sharks and their importance to the local economy; the role of ecological sciences in the court room; and, most notably, the rule of environmental law.

At the end of the trial, the Captain was sentenced to 4 years in prison. Depending upon their role, the 19 crew members were sentenced to 1 to 3 years in prison. At the time of writing, they have already been transferred to a penitentiary on the mainland. A fine was also ordered, as well as reparation of environmental damages resulting from the crime, in the amount of a $6,137.753,42.

The ship was confiscated.

Other measures include renaming the site were the ship was intercepted, Punta Pitt. In the future, tourists visiting this site will learn about the case and why it was renamed as ¨Punta Pitt – Punta Martillo¨.

The appeal and civil action

On September 6, 2017, defendants appealed the verdict. This means that the case is not over yet. On the other hand, Galapagos authorities have announced civil actions against the corporation that owns the ship, for the environmental damages caused to the Marine Reserve.

How will this case end? At the time of writing, it is unknown.

It is also unknown if a case of this magnitude will ever happen again. It is unlikely, at least on the short term: Authorities have already strengthened control of the Marine Reserve, with Navy vessels, planes and a submarine.

What we do know is that the immense fleet of some 300 vessels, left the border of the Ecuadorian Exclusive Economic Zone. This happened two days after the guilty verdict was issued. Law enforcement is all about sending a social message of compliance. This is never easy when it comes to enforcing environmental law, especially at sea. This time law enforcement was effective. 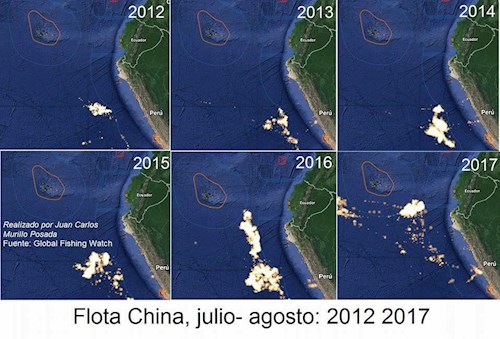