Again and again, and again and again... in the past 4 years, 3, no 4, or is it 5?  cargo ships have aground just offshore of Puerto Baquerizo Moreno on San Cristobal Island.   Yesterday the Baltic Betina nearly joined the list.  The Ecuadorian navy reported that the ship's crane broke down, resulting in its arm swinging far out while carrying a heavy load.  The ship was listing badly as a result and was at risk of capsizing.   The navy responded quickly and was able to repair the problem, bringing the ship back to an even keel.

Cargo ships heading for Galapagos appear to be cursed.   A review of previous CNH Tours news items will show at least 3 other ships (Jan 2015, July 2014, May 2014) having run aground in the aptly named "Shipwreck Bay", while two others  (Nov 2014, Feb 2017) were lost just on their way out of Guayaquil, the main continental port city from which Galapagos is supplied with just about 100% of everything the islands need, from toilet paper to diesel fuel.

At one point at the end of 2014 / early 2015, Galapagos residents suffered significant shortages of basic items (see those mentioned above) to the point were the government had to fly in supplies by military aircraft.   The Galapagos bound cargo ship "devil's triangle"  seems to be as active as ever. 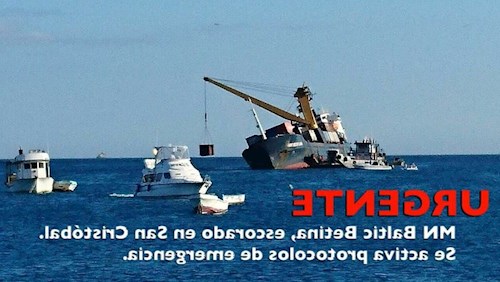