After many months of rumblings, and as predicted in this news column, Sierra Negra volcano on Isabela island burst into eruption on 26 June this year.  It was one of the most violent eruptions in Galapagos in the past few decades.  The Ecuadorian Geophysical Institute released its final assessment on the eruption recently – information in this article is gathered from that report.

Below: Sierra Negra volcano at the peak of its eruption - late June 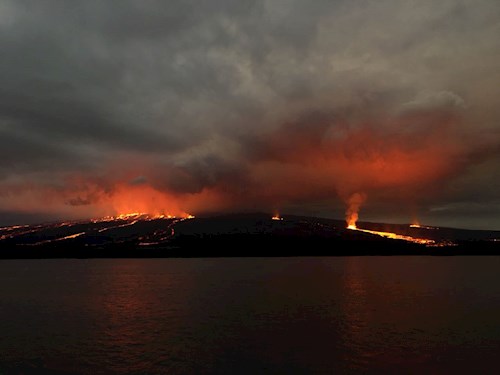 The volcano was most violent on its first day, with lava spewing out from 5 distinct fissures (see figure 1 below), flowing as much as 7 km downhill (though no flows reached the sea that day).   The flows continued until 23 August, mostly concentrated around fissure #4.   On July 6th, a lava flow reached the sea, resulting in an increase in the island’s surface area of 1.5 km squared (apx. 370 acres).    A total of 30.6 km squared of new lava fields were deposited (apx. 7,560 acres).

Figure 1:  Location of fissures and extent of lava flows (Geophysical Institute of Ecuador) 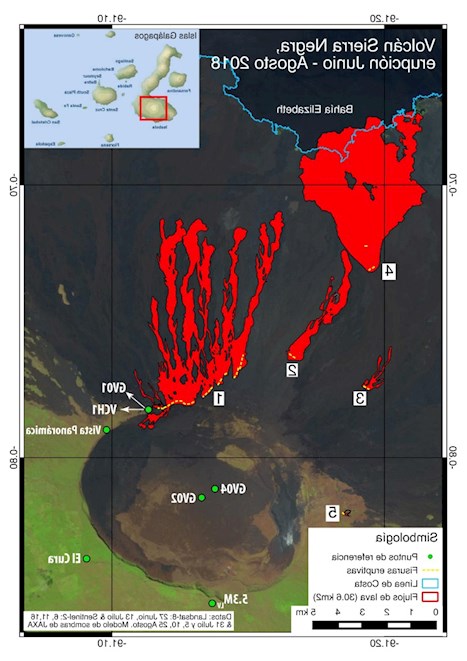 Though Sierra Negra has always been and will continue to be considered an active volcano it’s likely that the volcano will enter into a longer period of very much reduced activity. There is a chance that a second eruption might occur in the coming months should another pulse of magma emerge from the earth's depths.

The northern slopes of Sierra Negra volcano are generally covered by fairly recent lava flows (e.g. mostly less than a thousand years).  The image in figure 1 above clearly illustrates the vast black lava fields on that side of the caldera.  There is relatively little wildlife on this part of the island and very sparse vegetation.   On the geologic and even on evolutionary biology scales, volcanic eruptions and lava flows are normal in Galapagos.  These islands rose out of the sea some 5 million years ago thanks to these volcanoes.  It's only because there are islands here that the ancestors of the unique species we see in Galapagos today were able to colonize them. only to be pushed and squeezed into new life forms thanks to the forces of natural selection.  So, while eruptions might wipe out a particular population of plants or animals, or even drive a species to extinction, the forces at play that led to their creation in the first place plod on, and over time, will lead to the creation of yet new species (should humans not interfere too much...).

Witnessing a volcanic eruption is a rare privilege – leaving images and sensations seared (figuratively!) into one’s memory for the rest on one’s life.   Eruptions in Galapagos occur fairly regularly (every few years) and fortunate are those who happen to be at the right place at the right time.