Over the years, we’ve hosted people with all kinds of backgrounds on our charter cruises. One of them came to mind recently and I decided to write a little note about him. This British gentleman was part of a group of 16 friends from around London (UK), one of our very first charters, back in 2001. The tour’s leader was the father of a good friend of ours, who had joined us an earlier “Friends Cruise”.

We had arranged to meet up with the group after their cruise for a cocktail at our Galapagos residence. While chit-chatting with the group, we learned that one of them, Sandy (an unusual name for a man it seemed to me), had been a submarine captain in the British navy years back. The group joked about how he had been the most comfortable of all passengers in the lower decks of the ship.

Ten years later, I happened to pick up a book on the history of the British navy (To Rule the Waves: How the British Navy Shaped the Modern World). The book concluded with a chapter on the 1982 Falklands war. I was reading about the critical role the British navy had played, and how the fleet’s battle group commander, Sandy Woodward, had carried out his responsibilities as he commanded the Hermes aircraft carrier group .

“Sandy?!? Could it be the same?”. I found his email address from our archives and fired a note off to him, asking if indeed he had been the same admiral of the Falklands war fleet. Turns out it had been him. We had a delightful exchange. I asked if he had written about his experiences in the Falklands, and indeed he had. He published “One Hundred Days: The Memoirs of the Falklands Battle Group Commander” in 2003. I promptly purchased it and enjoyed it thoroughly. 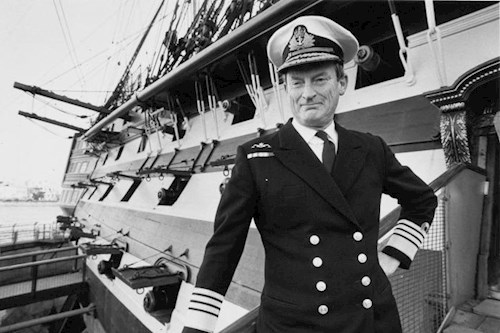 I still can’t imagine the irony in having hosted a British war fleet commander on a simple, modest little ship, captained by a local resident. I wonder if he’d inadvertently kept a watch over the activity on the bridge and would have loved hear his remarks on the ship.