I provide below a link to a nice, succinct photo/video article that was published in the New York Times today.   It's a good read and helps to illustrate how climate change might affect Galapagos wildlife.

The article cites several scientists, many of whom are old friends of ours - Martin Wikelski (the most charming herpetologist we know), Heinke Jaeger (who makes her own tonic water from local plants) and David Anderson.  It also cites UNESCO (my former employer), and warnings on how some Galapagos species might be particularly vulnerable to climate change; I was directly involved in the UNESCO work on climate change and World Heritage.

During regular years, impacts from climate change are minimal.  Rather, it's how climate change might affect the severity and frequency of El Nino events (during which time Galapagos ecosystems are highly disturbed) that matters.

The last severe El Nino occurred in 1997-98, the year we arrived in the islands.   It was HOT and HUMID.  Ocean water felt like bath water.  We saw marine iguana skeletons littering the shores.    Visiting during an El Nino event gives you a very interesting perspective on how the forces of nature push species to adapt, where only those that can survive unusually harsh conditions can pass along their genes to the next generation.  Galapagos wildlife has evolved over millions of years under these conditions - but there are limits beyond which even the most resilient and adaptable of species cannot survive.  The Galapagos penguin might be the first to disappear should El Nino events become more frequent and more severe.

Click HERE to access the New York Times article.  It's not very long, but has several very nice pictures and short videos, taken using a drone (it's very hard to get permission to use a drone in Galapagos - don't even think about it.   The New York Times journalists were lucky - they must have had some strings available for pulling). 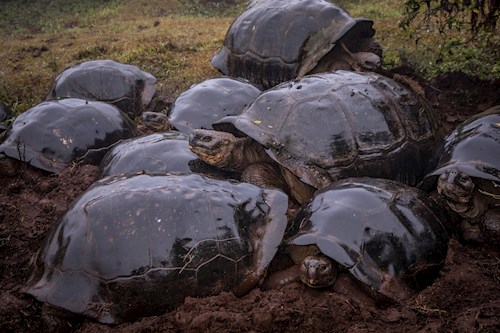