I tried hard to find a catchy title for this new item - I don't think I succeeded.

I am shamelessly copy-pasting a short item that appeared in renews.biz this week, and include a few editorial comments at the end:

"Siemens has inaugurated a hybrid solar and energy storage system on the Galapagos island of Isabela in the Pacific Ocean.

The 952kW photovoltaic plant combined with a 660kW battery facility is remotely monitored by the Siemens-Mindsphere application centres in Munich, Germany, and Austin, Texas.

Siemens was awarded a contract for the project, which supplies power to 900 households on the largest Galapagos island, by the Ministry of Electricity and Renewable Energy of Ecuador.

The plant is operated by the local energy supplier Elecgalapagos.

Siemens head of distributed energy systems John Kovach said: “We are proud to contribute to the protection of the Galapagos Islands with our climate-neutral technology.

“We have delivered the first local energy system of its kind, enabling our customer to achieve important long-term environmental goals.”

The Ecuadorian government has set up a programme called Zero Fossil Fuels on the Galapagos Islands to switch the UNESCO World Heritage Site away from fossil fuel-based generation.

It aims for the Galapagos to be 100% supplied by renewable energy, including wind and solar.

Oil produced by the native plant Jatropha Curcas is also planned to be used as a biofuel."

PROMISED EDITORIAL:  While one has to welcome and encourage low/zero carbon emission renewable energy anywhere it makes sense (including Galapagos), I've also suspected that companies installing these in Galapagos are doing it more for publicity reasons than for the maximum effectiveness of an investment.   The fact that the German Development Bank is supporting the project means that on economic grounds, it may not stand up by itself.  I suspect Siemens will be liberally referring to this "Galapagos project" in their marketing materials  to attract interest in its products now that it has completed the work.

A similar installation on the mainland would have had much lower installation costs and would have had the same impact in terms of reducing fossil fuel emissions.   If reducing emissions were a big concern in Galapagos, more investment would be made in improving construction standards of houses and office buildings there.  These are almost all poorly conceived in terms of passive cooling design and have little if any insulation which, with the regular increase in the use of air conditioning, ends up raising the demand for electricity beyond the capacity of solar panels to supply.

The Siemens solar power plant outside of Villamil, on Isabela Island (picture by Siemens) 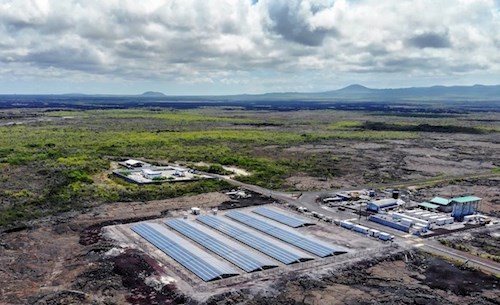